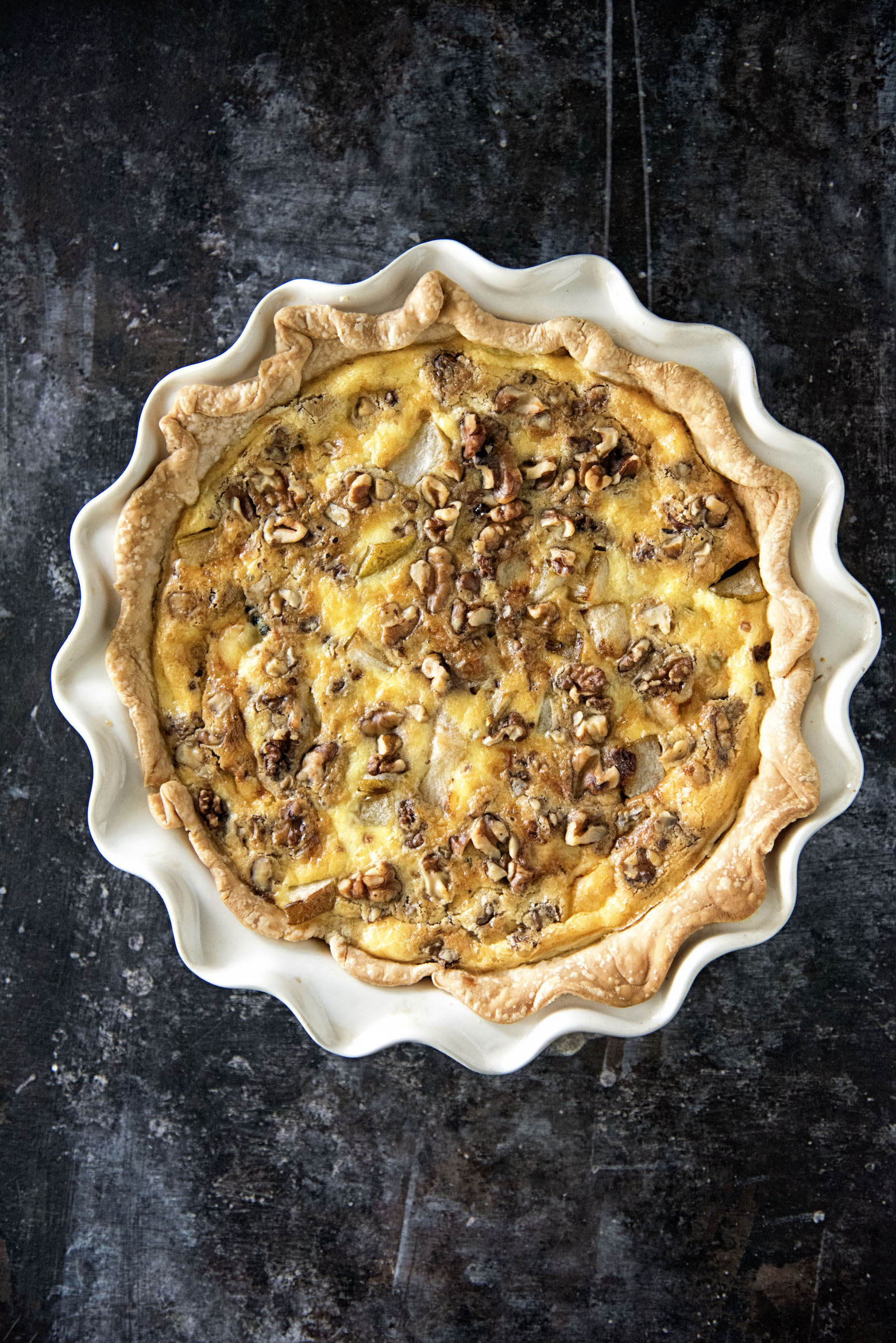 I love quiche for entertaining.

It’s incredibly versatile and you can quickly throw one together.

And almost everyone eats them.

I often create quiches based on leftovers or randoms in the fridge.

One day when I had too many pears, blue cheese, and walnuts leftover after a salad I made I decided to throw it in a quiche.

The quiche ended up being a huge hit.

In recent years I’ve started to brush a bottom layer of my pear-onion jam that I use with my soups and my blue cheese cheesecake.

Rogue Creamery Oregon Blue Cheese was used in this recipe. You may not be able to find it so use your favorite blue cheese.

I discovered this blue cheese when I was visiting Harry and David years ago and have loved it ever since.

If you are a fan of pear and blue cheese I highly suggest giving this a try. It’s a surprise hit. 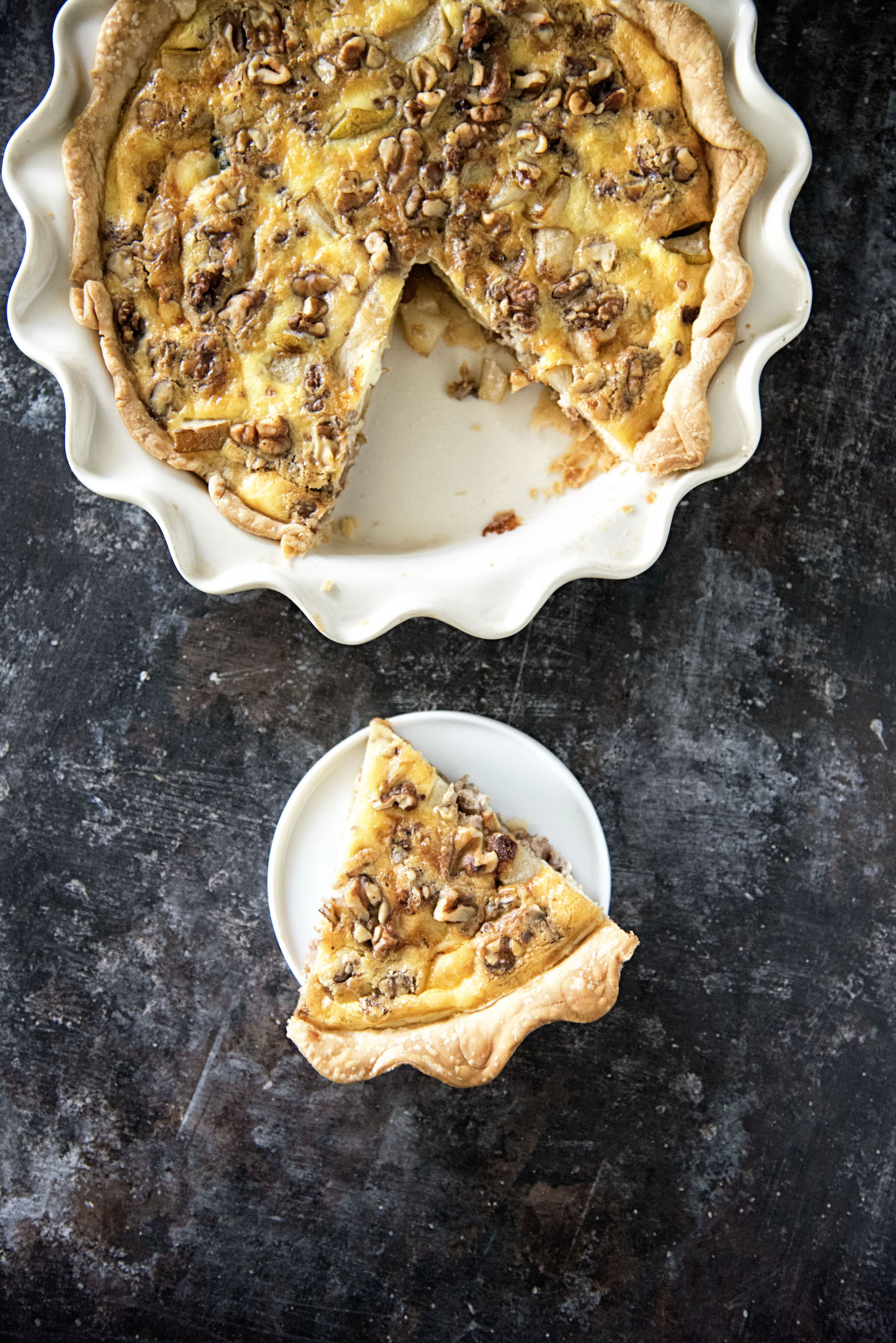 Preheat the oven to 375 degrees F.

Line the pie crust with parchment paper and fill with pie weights or dried beans.

Remove the paper and weights and bake until golden brown, 8 to 10 minutes.

Remove from the oven and cool on a wire rack.

Leave the oven on.

Spread the Pear-Onion Jam evenly on to the bottom of the pie crust.

In a medium skillet, cook the pear in 1 tsp. unsalted butter until soft and starting to brown, about 5 minutes.

Arrange the pears evenly over the pear-onion jam.

Then add the walnuts and blue cheese.

In a large bowl, beat the eggs, yolks, and cream.

Add the salt and nutmeg and whisk to combine.

Pour into the prepared crust and bake until the custard is golden, puffed, and set yet still slightly wiggly in the center, 30 to 35 minutes 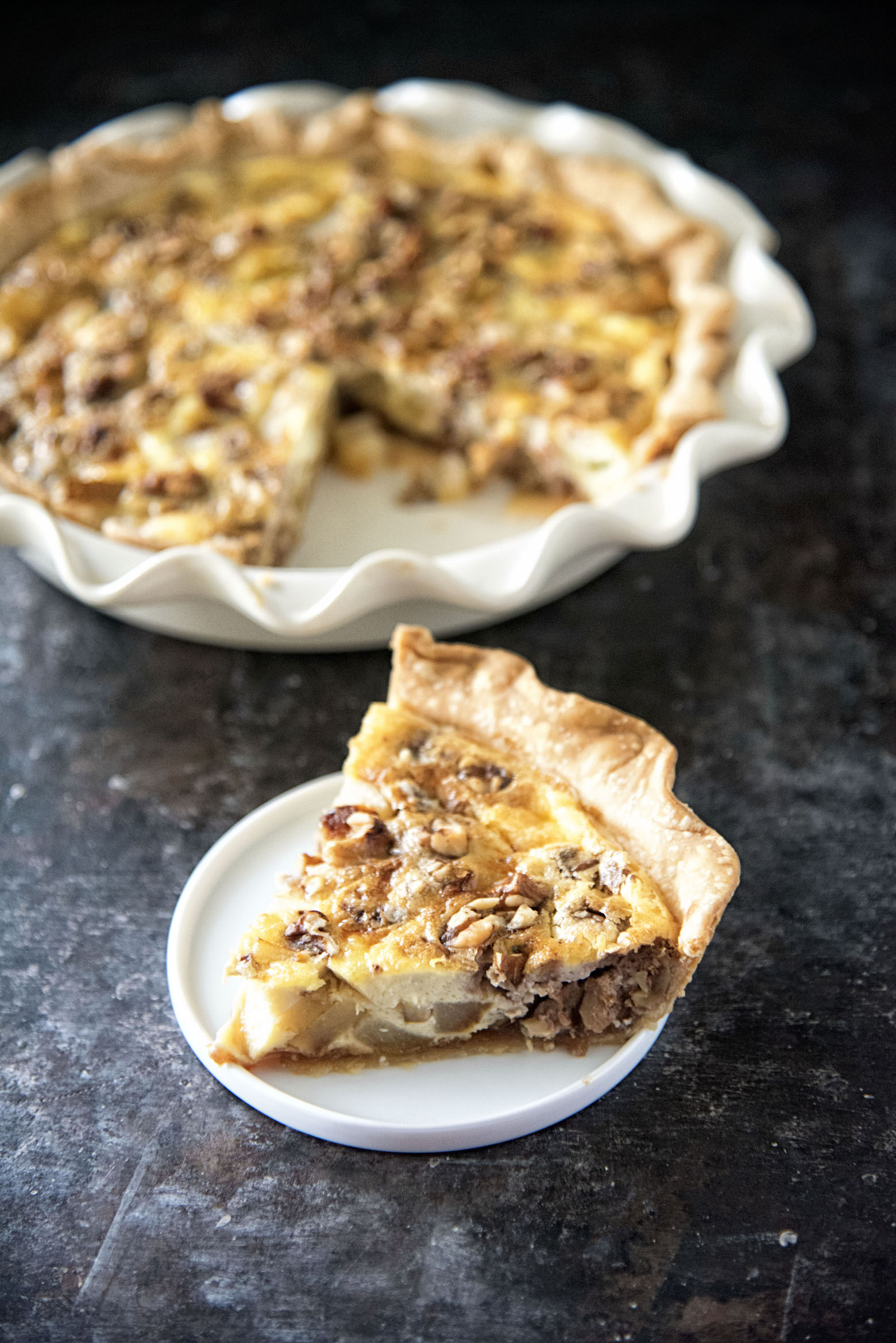 The Grinch Mint Ice Cream Hot Chocolate is made us

These Grinch Jell-O Shots are made with Jolly Ranc

The Grinch Peppermint Cheesecake Cups have a green

In trying to do fun, safe, and different holiday s

The Grinch Mint Ice Cream Hot Chocolate is made us

These Grinch Jell-O Shots are made with Jolly Ranc

The Grinch Peppermint Cheesecake Cups have a green

In trying to do fun, safe, and different holiday s

The Grinch Vanilla Cake Roll is made with vanilla

This Gingerbread White Russian is a great holiday