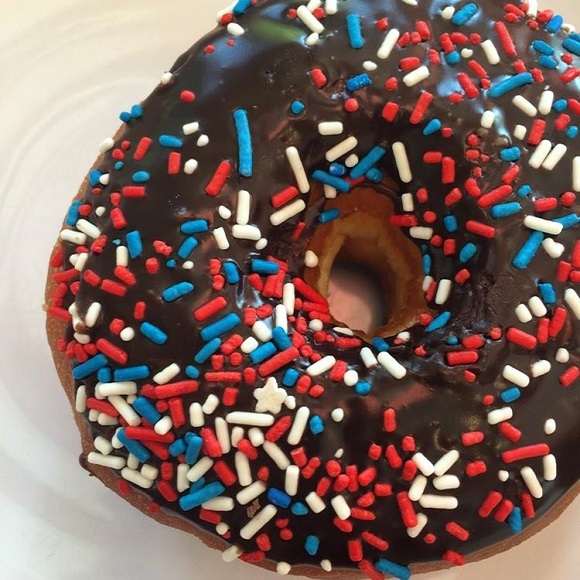 I get a lot of things popping up in my newsfeed but Ariana Grande (whom I had to ask my stepkids who she was) licking donuts and saying she hates America was pretty much the most bizarre of the week.

If you haven’t seen it the singer and former Disney star was at a donut shop with her boyfriend and friends. Where both her and her boyfriend licked donuts (that were later sold to people because the shop didn’t know they were licked at the time) and then is caught on tape being disgusted saying she hates America.

Then she came out with this amazing reason as to why she said what she said.

“I am EXTREMELY proud to be an American and I’ve always made it clear that I love my county , what I said in a private moment with my friend, who was buying the donuts, was taken out of context and I am sorry for not using more discretion with my choice of words.”

She then said that because she leads a healthy lifestyle she is upset with “how freely we as Americans eat and consume things without giving any thought to the consequences.”

“The fact that the United States has one of the highest child obesity rates in the world frustrates me,” she said. “We need to do more to educate ourselves and our children about the dangers of overeating and the poison that we put into our bodies. “However I should have known better in how I expressed myself; and with my new responsibility to others as a public figure I will strive to be better.”

I have so many thoughts and questions:

First off, there is no mention as to why she licked the donuts. None whatsoever. My theory of course is that since she is the size of my leg she actually really does want a donut but knows if she eats them she can’t maintain her tiny, tiny figure.

If you are so disgusted by people’s food choices why are you in a donut shop to begin with?

If you are SOOO upset about obesity in America why don’t you use some of your hard earned money (which you got from mainly American’s) to set up a charity to help overweight teens? Just a thought.

And why hate America? Shouldn’t you be hating Americans? And just us fatties though. Because we are the worst. I mean we eat the whole donut not just lick the frosting.

Now I was going to go suggest that you just go start licking things in protest of whatever drives you crazy. I myself was ready to find a Greek restaurant and go lick Baklava since I don’t like the demise of the economy in Greece. That will show them. But it turns out that she is now being investigated. Apparently people don’t realize how lucky they are to have their donut licked by the amazing Ariana Grande. Fools.

If you feel like licking your own donuts or eating the whole thing (you evil American) here are some suggestions.