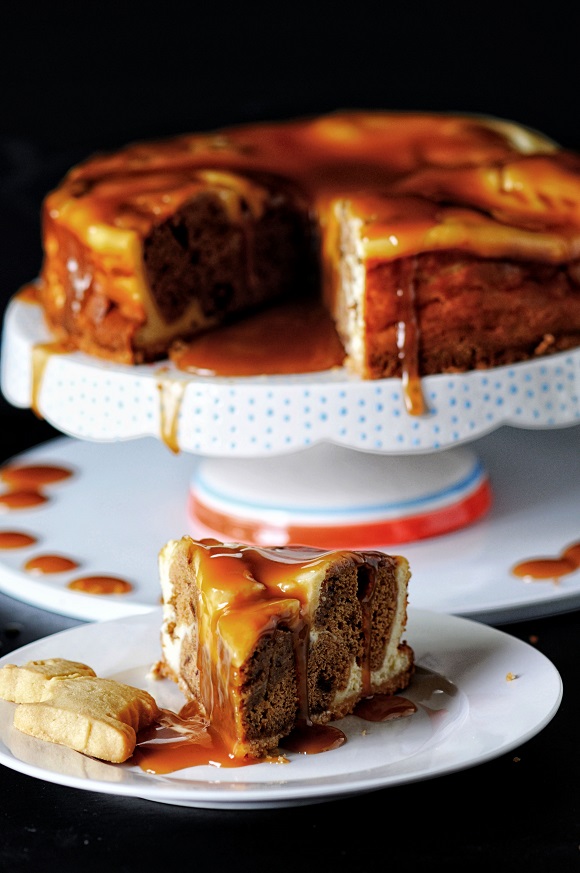 I was never one of those kids who didn’t like hanging out with their parents. Heck even on my 16th birthday I chose to spend the day with my parents (friends later) going and seeing Who Framed Roger Rabbit and then getting to pick out a pair of mint green Guess jeans that my mother used to choke at the price (I still wish I owned those…mint is back). We picked a sport every year to do together from bowling to badminton. And every year we went to the Scottish Highland Games.

The Scottish Highland Games in Phoenix is interesting for the mere fact that wool and heat don’t mix. Held at a park each year with like three trees that people fought over for the shade. Besides the bands, the caber toss, the myriad of kilts being the food lover that I am I cared about the booths. Each year I looked for three things: Haribo Roulettes (because they didn’t sell them in the US back then), Mackintosh Toffee, and Walkers Shortbread. I would buy enough for a year…and eat it in two weeks. 🙂

So imagine my delight when Walkers Shortbread asked me if I would like to use their shortbread in a recipe. Ummm, YES!!! It is the only shortbread I buy. It has a buttery taste like no other. Most likely because the ingredients in their shortbread are literally flour, butter, sugar, and salt. Yep, that’s it. And FYI my gluten free friends tell me their gluten free shortbread is amazing (so if that’s your thing you should try it out).

Scottish food is often made fun of…the movie So I Married An Axe Murder summed it up best “I think most Scottish cuisine is based on a dare”. One treat that comes out of there (there is controversy as to where it exactly originated) is so not based on a dare. In fact, it’s my mother’s favorite dessert of all time: Sticky Toffee Pudding. If I see it on a menu I order it, well that or bread pudding. It’s a warm date cake with the most amazing toffee sauce ever. The sauce actually takes some time but so worth it…you literally make toffee candy and at the last minute turn it into a sauce. 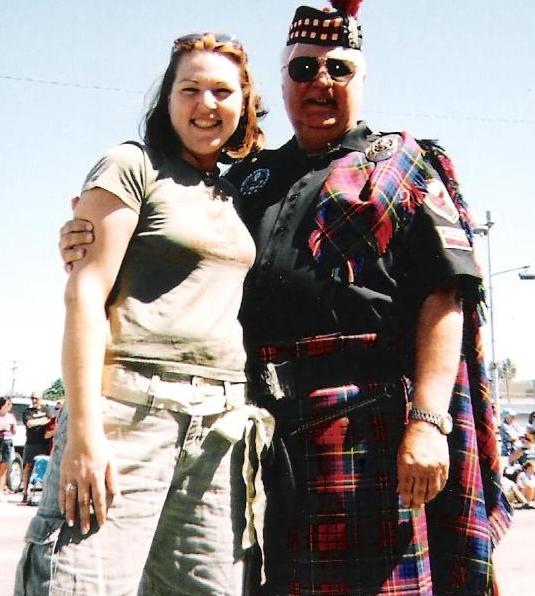 I decided to make a Sticky Toffee Pudding Cheesecake. The shortbread crust is in honor of my father. He actually ended up being the Drum Major of a Pipe Band for years…he even tried to get me to play the bagpipes…did not take. The Sticky Toffee Pudding is for my mom. And the cheesecake is for me. This dessert is a real family affair you could say. This dessert blew away any expectations I had. Normally when I make something for this blog I take a couple bites and then give away the rest. I kept this. I hid this. I ate two FULL-size pieces of this the first day. I’m sure the next time I see my family they will have me make this for them and we will fight over it the way people fought over shade trees at the Highland Games in Phoenix.

I want to thank Walkers Shortbread for sponsoring this post. It truly is the best shortbread around. If you have never had it, do yourself a favor and go get some. As always, I may have been compensated for this post but the words, bad grammar, and opinions are all mine. You can like their FB page or follow them on Twitter. 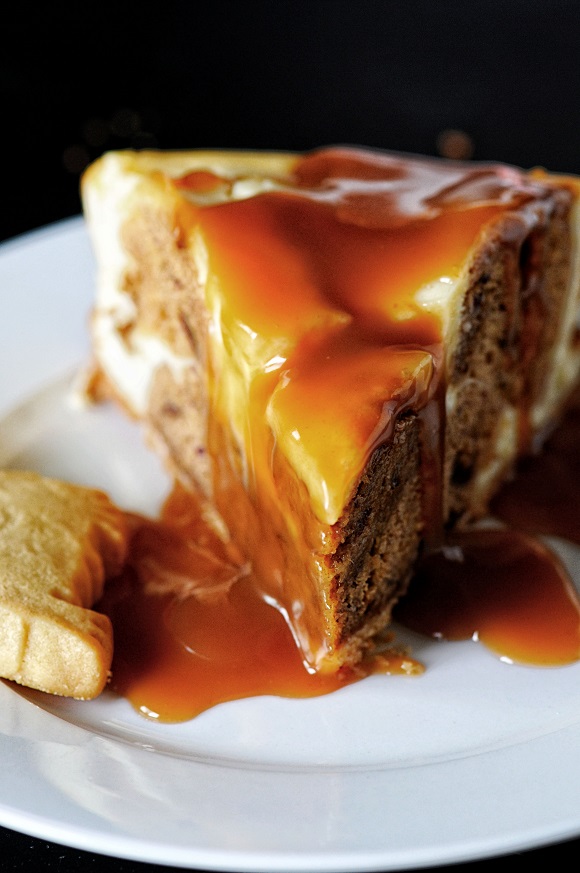 Combine ingredients in a food processor.
This makes for a thick crust. If you want less crust, half the recipe.
Press mixture down flat into a greased 10-inch spring form pan.
Preheat oven to 350F.
Bake crust for 12 minutes.
Set aside.

2 oz. unsalted butter, at room temperature
6 oz. dates, pitted
1 cup plus 2 TBSP all-purpose flour
1 tsp. Baking powder
1/4 tsp. Baking soda
Pinch salt
3/4 cup light brown sugar
1 tsp. vanilla extract
1 large egg
Combine the dates and 3/4 cup water in a small saucepan and cook until the dates are softened, about 15 minutes.
Puree in a blender and cool.
Combine the flour, baking powder, baking soda and salt in a small bowl and set aside.
Using a stand mixer with the paddle attachment, cream together the brown sugar and butter until light and fluffy.
Add the vanilla, egg, and date puree.
Stir in the dry ingredients.
Set aside.

2 (8oz.) packages cream cheese, at room temperature
2/3 cup granulated sugar
2 tsp. all-purpose flour
2 large eggs, at room temperature
1 tsp. vanilla extract
½ cup sour cream
Using a stand mixer with a paddle attachment, mix together the sugar and cream cheese until light and fluffy.
Add eggs one at a time, scraping down after each addition.
Add the flour, vanilla, and sour cream and beat until smooth.

Toffee Sauce:
2 1/2 cups heavy cream
1 cup granulated sugar
1/2 cup light corn syrup
4 oz. unsalted butter
In a heavy saucepan over medium heat, combine 1 1/4 cups of the heavy cream, the sugar, corn syrup and butter.
Cook, stirring often, until a dark amber color, about 40 minutes.
Carefully add the remaining 1 1/4 cups heavy cream, be careful as it is hot and will bubble up.
Pour over cheesecake and enjoy. 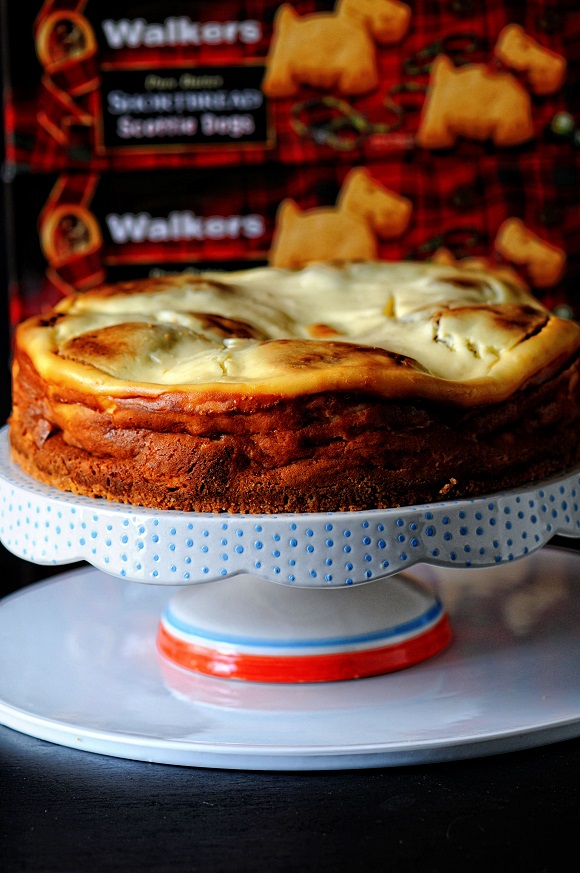