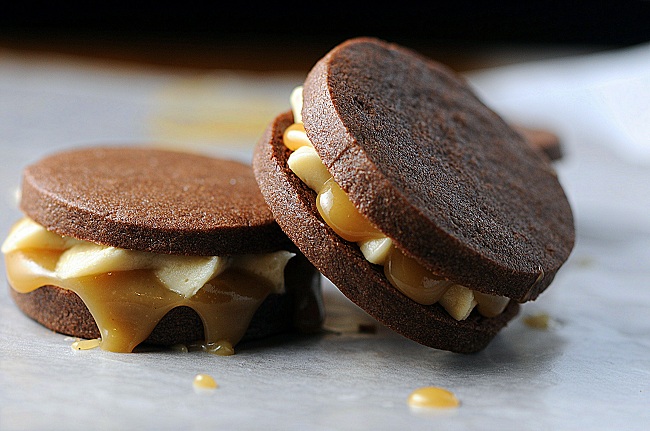 So Crazy Cocker Spaniel has separation anxiety and abandonment issues. I wish I was never told that at the shelter where I volunteered at and got her from because I found out years later that I made it worse. Cesar Millan is the dog whisperer…sounds silly but the guy really is good. I was watching his show one day and it was on separation anxiety and it hit me. The issue wasn’t with the dog…it was with me. I made a big deal about leaving her and a big deal when I came back. She was reacting to that. My reaction is what was making it worse.

At the gym this weekend his show was on and I got sucked into watching about this woman and her dog that would freak out on other dogs. Turns out the woman’s own fear was being projected onto the dog and once they worked that out with her the dog started to do fine with other animals. She talked about how she always thought of worst case scenario and Cesar told her that she was the “prisoner of your own creativity”. I liked that. I think that is true for a lot of people. You make things worse than what they are. Or you project your own feelings on to others.

Anyway part of the dog’s treatment was that the owner went to therapy. I think if you have an issue it’s up to you to be responsible and help make the issue better. When I knew that MDP’s kids would be coming and living with us I switched from my one counselor to one that specialized in blended families, for I had always been around kids being a teacher, but this was a whole different ball game. I wanted to do what was best to make the transition the easiest. MDP also joins in from time to time when he can so when issues arise we can work on them together. I like to think that in doing that the transition for his teens has gone pretty well.

I could have built up in my head all the ways that things could have gone wrong…or been the prisoner of my own creativity but instead I brainstormed all the positives that I could get out of the change. So many people just prepare for the worst or react so poorly that they cause anxiety and sadness in others…people or pets. Some people sadly can’t see that they are indeed the problem. I never thought I was the problem with the dog…but I was. I owned up to that. I wish more people would own up to their own reactions.

One reaction I did get was holy cow these are good…I mean these suck don’t anyone eat any of these. That’s what our goalie said. It was his birthday the day before and I decided that since he is one of the guys that number one loves food, and number two contributes money to snack fund, that I would step up and make something extra yummy for him. Normally we have a few snacks left, this week we did not. Well we had a few left only because our goalie took them home and probably would have wrestled people for them. Since St. Patty’s Day will be coming up sort of soon I have had Bailey’s on the mind. That and our goalie loves to add Bailey’s to his milkshakes when we go to Denny’s…yes you can get booze at some Denny’s!

In someways these remind me of the holidays. My mom always was drinking Bailey’s around holiday time (shhhh don’t tell her I snitched on her) in her coffee or cocoa. As an adult now I see the appeal. 🙂 This are a yummy chocolate sugar cookie (I use this to make “gingerbread” men sometimes as an alternative). Filled with a yummy Bailey’s Irish Cream Buttercream and homemade Whiskey Caramel. All three are good separate but together they are fantastic. 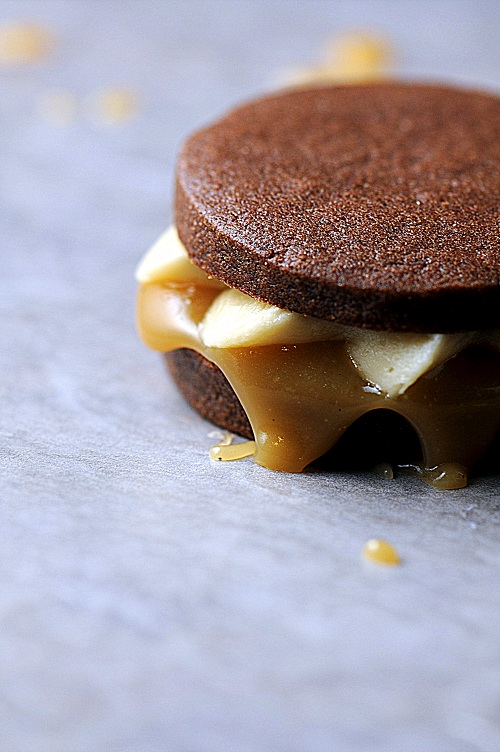 In a stand mixer using the paddle attachment cream together the butter and sugar on medium speed until light and fluffy, about 3 minutes.

Turn mixer to low, and add in egg and vanilla. Mix until just incorporated.

With mixer still on low, add in flour a cup at a time. Then add in cocoa powder and then sprinkle with pinch of salt. Mix until cocoa is incorporated, then turn off mixer.

The dough will appear to be a bit sticky.
Transfer dough to a piece a parchment paper. Place another piece of parchment paper on top and roll out dough to desired thickness. Keep in mind that these are going to be sandwich cookies so try not to make them too thick. Mine were thick because my hand sucks and rolling cookies out and my hand do not mix.

Place dough (still sandwiched in parchment) in refrigerator for about an hour, or freezer for 15 minutes, until dough is firm.

When ready to bake, turn oven to 350. Remove dough and then remove one side of parchment. Using your chosen cookie cutter shape (I went round), cut out cookies and place on prepared cookie sheet.
After you have cut out all your cookies, roll dough scraps back together and roll out again.
Bake cookies for 8-11 minutes. Allow to cool to room temperature.
Cookie recipe slightly adapted from I am Baker

Using a stand mixer with paddle attachment beat the butter and shortening with 1 cup of powdered sugar.

I used THIS recipe for the Whiskey Caramels except no salt and mine didn’t get nearly that dark.

To make the cookies pipe some buttercream onto one cookie and a spoonful of caramel on the other cookie and sandwich them together. You will have extra caramel…suffer. 😛

« Tequila….
Every Thing is Better with Bacon…. »