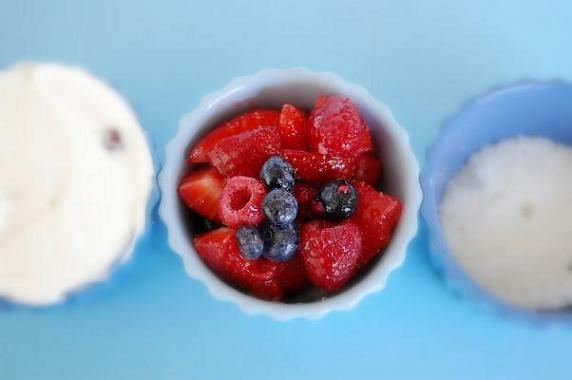 I would love to report that I am healthy but that would be a down right lie. I continue to suffer. Lucky me. I am hoping that it will be gone by my birthday(about a week and a half)…surely that is not asking that much of my body.
Even though I was sick, I ended up going to a cooking class last week. It was already paid for and it was by one of my favorite cookbook authors, Greg Atkinson. We had a lovely menu of mango and avocado salad(which is over on Northwest Noshings), slow cooked halibut with spring veggies and a strawberry brulee.
Knowing that this weeks TWD recipe was a Mixed Berry Cobbler(chosen by Beth of Our Sweet Life) I had planned on making a cobbler bottom, filling it with mixed berries and then doing the whipped cream/sour cream mixture on top. But then I got to thinking that the cobbler bottom would be too heavy for this dessert. So I went in a whole new direction, angel food cake. By doing that the recipe still remained refreshing, like what I had at the cooking class.
If you are going to make this I beg you not to use low fat or fat free sour cream. I mean, the angel food cake is practically nothing as are the berries, so you can stand to have some extra calories in the topping!
To see the real deal(meaning the actual cobbler), head on over to the Tuesday’s With Dorie website. 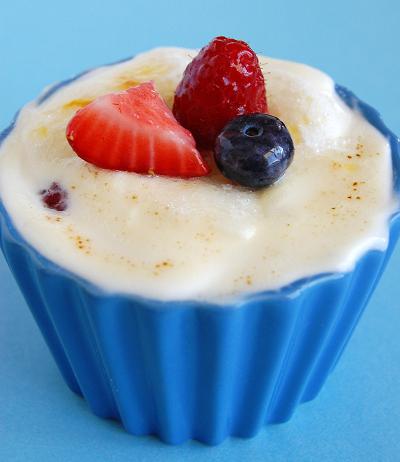 Beat egg whites; add cream of tartar and salt when eggs are frothy. Continue beating until egg whites stand in peaks. Gradually beat in 1 cup of granulated sugar. Fold in vanilla. Sift the sifted and measured flour three more times; mix with remaining 1/2 cup of sugar.
Fold flour mixture gently into batter until well incorporated.
Using a small ice cream scoop or large tablespoon, fill muffin cups about 2/3 to 3/4 full. Bake(at 350F) for about 15 to 17 minutes, or until lightly browned. Cool for 5 minutes in pan on rack. Remove cupcakes to a rack to cool completely.
Cut the top off of the angel food cupcakes(go ahead and just eat that yourself 🙂 ). Take the bottom of the cupcake and horizontally cut it in two so that you can fit it into a ramekin. Place angel food cake piece at the bottom of a 4-ounce oven proff ramekin. 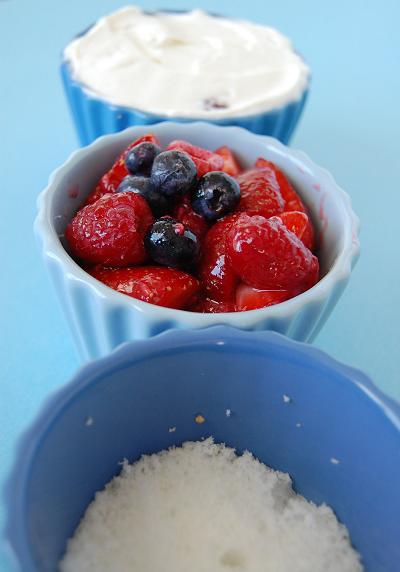 In a small bowl combine the berries, lemon juice and granulated sugar. Distribute the mixture evenly among the ramekins over the angel food cake.

In a separate bowl, whip the cream until it is stiff. Stir in the powdered sugar, the lemon juice and the vanilla extract. Gently fold in the sour cream. Distribute the cream mixture evenly over the berries and with the straight side of a rubber spatula or a butter knife, flatten the cream on top of the berries.
Light a small butane or propane torch. Working with one dish at a time, sprinkle about 2 tsp of sugar over the top of the whipped cream mixture and run the flame of the lit torch over the sugar until it bubbles up and turns brown. The sugar will form a thin layer of brown caramel over the surface of the cream. Serve at once. 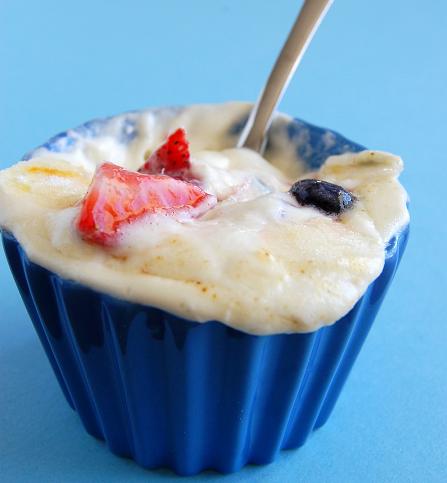 « Feeling Crumb-y…
The first picture says it all…. »