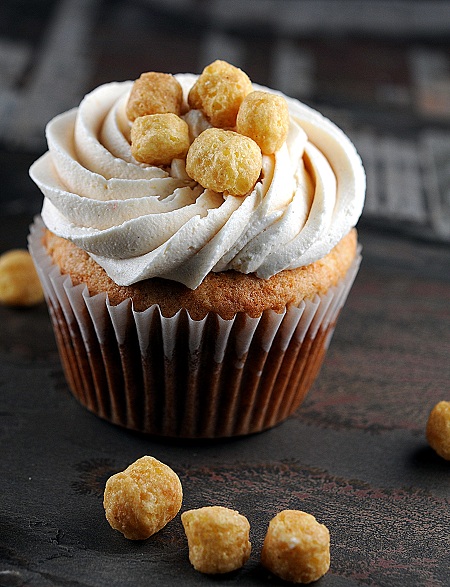 Growing up I loved watching Bob Ross on PBS…even as a teenager (did you know he was on for 31 seasons! That’s a lot of happy trees). So much so that I convinced my dad to get to use his oil paints (he used to paint). It’s not that I really every think I wanted to paint. I think it was that Bob Ross and his happy trees was just so darn happy that I thought maybe if I painted myself something in sky blue and Van Dyke brown my happiness would come too. It was probably just the paint fumes. 😛

Anyway I painted a variety of things…all landscape of course and I made what Bob Ross would call happy accidents a lot (as he would say “we don’t make mistakes, we just have happy accidents”). My first ones were mostly blobs but my father hung them proudly and my mother followed along and hid them in the dark corners of the house. 🙂

I wasn’t just randomly thinking of Bob Ross…yesterday he was on the Google page and several people “thought of me” when they saw it and asked me if I had seen it. I love that. I get that a lot in my life and that is my FAVORITE thing. Seriously. It says to me that I make a good impact on people and am on their mind from time to time.

Though what people usually think of me for is hockey, beer, bacon, Swedish Fish, Pi Day (3.14), Groundhog Day, Hello Kitty and Boba Fett. So I’m a nitrate filled beer drinking hockey player with a Star Wars problem who eats Swedish Fish for dessert. I guess it’s better than everyone thinking bitch or whore. 😛 And I love when blog readers send stuff…because that truly is like Christmas as a kid. Where you don’t know what you are getting. You just don’t really get those surprises anymore as an adult. I’ve gotten some really thoughtful gifts. Yes clearly sending me cookbooks or donating $ specifically for cookbooks is awesome (thanks A for doing that!) but there have been some unusual ones that shows me people are really paying attention and caring. Case in point last year I got an Electric Mosquito Racket (literally like a tennis racket but kills bugs) when I was commenting about being overrun by mosquitos. Strange? You bet. Awesome? You bet. And I use it all the time. I kill all sorts of bugs with it…works great. Someone could seriously send me a sticker in the mail and I would be excited (for one that it’s not a bill).

My mother of course cringes that I give my address away…I tell her death by blog stalker is a more interesting way to die. It does not comfort her. But I assure her that the number one thing everyone starts their email with is that “I’m not a stalker” so I’m golden. 😀

Speaking of golden….my gold bananas were turning way brown and so I went in search of something to make with them. I recently got a few cookbooks to review and got a super fun one called Bake It in a Cupcake: 50 Treats with a Surprise Inside

. Just like the title suggests the whole book is cupcakes with other food baked inside. And we aren’t just talking about a piece of candy…Baklava! Coconut Macaroons (which go with Key Lime Cupcakes…so going to make those come summer!). Lemon Bars in a cupcake! 7 Layer Bars in a Cupcake! It’s madness I tell you…but the awesome kind of madness.

I made more of an inspired by kind of recipe since there was no banana cupcake in there and that’s what I wanted. But she did have Breakfast Cereal Cupcakes with Malted Milk Frosting and immediately was inspired! Banana Peanut Butter Captain Crunch Chocolate Chip Cupcake with Peanut Butter Malted Milk Buttercream. Say that three times fast. 🙂

So start stuffing things into cupcakes and if you see something that reminds you of someone…tell them…you will probably make their day. 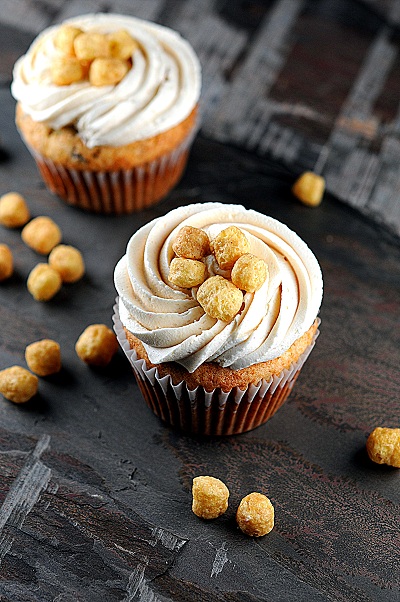 Using a stand mixer with paddle attachment cream shortening and sugar until light and fluffy.

Add eggs, one at a time, beating well after each addition.

Beat in bananas and vanilla.

Fill paper-lined muffin cups two-thirds full. Bake at 375°F for 18-22 minutes or until a toothpick inserted near the center comes out clean. Cool for 10 minutes before removing from pan to a wire rack to cool completely.

Using a stand mixer with the paddle attachment cream the butter and peanut butter for about 2 minutes, until fluffy.

Add the powdered sugar, 1/2 cup at a time, whipping on medium-high speed until fluffy.

Add the malted milk powder and whip until just combined. If too thick thin with milk.

Cupcake idea inspired by and frosting adapted from 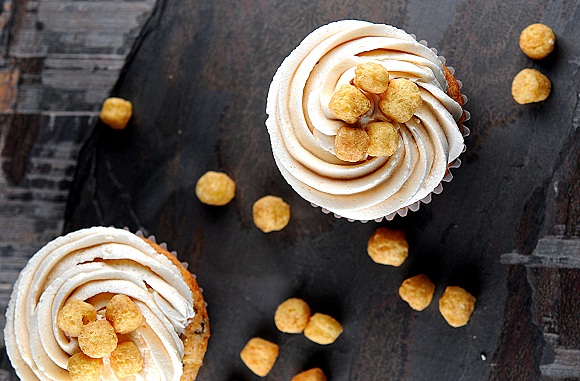