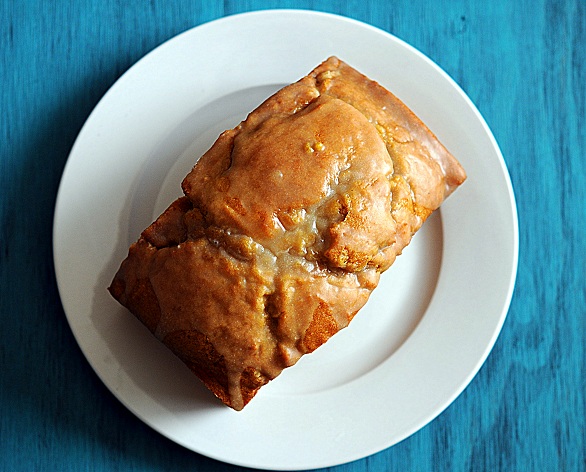 I was having writers block (still am) and insomnia from the Sudafed and so I thought I would just write random crap since I have had this recipe ready for days but nothing to go along with it.

I think I am going to put my dog on DogShaming.com. She has a serious used Kleenex problem. She used to try and hide it like all good closet snot eating dogs should but NO she has gotten so brazen that she really doesn’t care if we are standing right there.

I had a college moment today where the machine was down and I needed gas or else I wasn’t going anywhere. So I had to scavenger my car for money. Just a little over $6 in change. I felt like a moron paying the guy mostly in nickels but hey, it is what it is buddy. I had the slight need to punch him when he suggested that I only get $5 something in gas and buy a lotto ticket with a spare dollar.

After months of searching I finally found Key Lime Pie Vodka…pretty much about as yummy as expected. Now I am wishing I never found it. 😛

Oh and I found Pumpkin Pie too. That has yet to be touched…but don’t you worry, I’m sure something will be done about that. 😀

I made it out of Target for under $30…I get some sort of award for that right?

I found an old mix tape when cleaning the other day. I listened to some depressing music as a teenager it’s a wonder I made it out alive. My friends too…we all listened to it.

My very pretty blue background was made by MDP and his daughter who was nice enough to paint it for me. I love helpers.

Don’t run a blog about your family talking about how poor you are that you aren’t going to have Christmas and you can’t afford to feed your kids or throw them a birthday party (they are two make them a cake and be done) but just a week and a half before take pictures of the new clothing you bought they young kids and Sparkly Blue Tom’s shoes for yourself that cost $50. Then get donations from people so that you can still throw the party. Ummm, here’s a crazy idea if you really are struggling skip the party and I don’t know feed your kids. Because I am going to guess that sparkly Tom’s shoes don’t taste very good.

This pound cake is pretty darn tasty. If you have pecans throw some in it. I didn’t have any so they got left out. But I think they would have gone nicely with the cake. MDP polished off a mini loaf in the blink of an eye…so apparently he thought it was good. 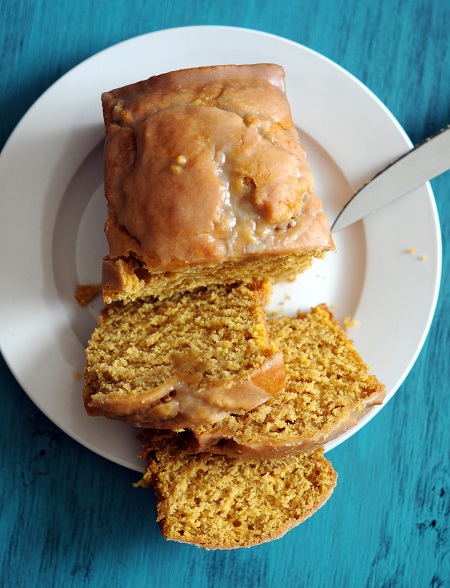 Grease and flour a 12-cup Bundt cake pan or you can use 4 mini loaf pans I use these .

Using a stand mixer with the paddle attachment cream the butter and sugars until light and fluffy.

Beat in eggs, one at a time, beating well after each addition.

Beat in pumpkin and vanilla.

Spoon into the prepared Bundt pan and bake for 55 to 60 minutes (if you are using the mini loaf pans they take a little less time about 45 minutes…but watch and see as every oven is different), or until a wooden toothpick or cake tester comes out clean when inserted in center.

Cool for 15 minutes in the pan on a rack; invert onto a serving plate to cool completely. Glaze with the Maple Glaze.
Maple Glaze:
In a small saucepan, combine the butter, maple syrup, and cream; bring to a boil. Continue to boil for 1 minute. Remove from heat and sift the powdered sugar into the hot mixture.

Whisk until smooth. Let cool for about 15 to 20 minutes, until slightly thickened. Stir in the finely chopped pecans, if using. Drizzle over the cooled cake.
Slightly adapted from About.com 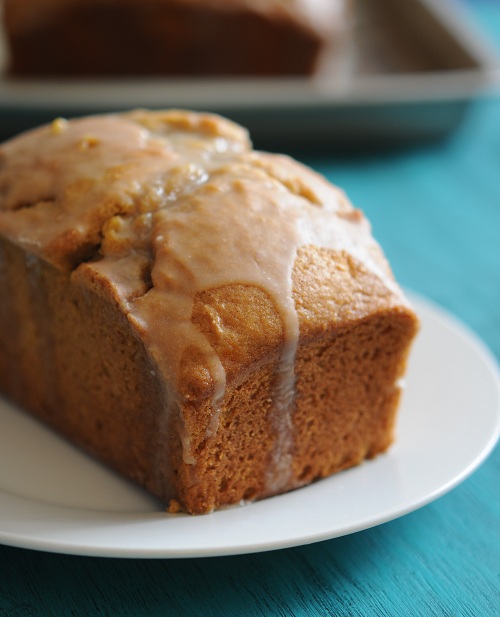