(Blackberry and Sparkling Wine Geletina…yep that’s dessert, not a drink!)

I am a stay at home kind of gal when it comes to New Years. There is nothing better than filling up on food and wine and then only having to walk three feet to the bedroom. 🙂 Sam’s Club asked a few of us bloggers to throw out some New Year’s Eve party ideas. My theme was Simple New Year’s Eve. Alright, definitely up my alley. I was all good with this until I found out I had to come up with decorations. Umm, Martha Stewart and Sandra Lee I am not. There are not table scapes in my future. So I panicked a little, until one day I came in and my dog (I leave the TV on for her) was watching a painting show on PBS. The lady was paining a bowl a fruit. And there I had it. Fruit is not only art, but edible…and so it began.
Off to Sam’s Club I went to find as much fruit as I can. And what goes better with fruit, than cheese! You already know that Sam’s Club offers some great cheeses, I just had to narrow it down a bit. I planned my menu to have some fruit in every bite. But let’s keep in mind that nuts and olives are fruits too. 🙂 No, it’s not cheating. 😛 I also planned my menu to be as simple as possible, often using some of the same ingredients throughout the party dishes. The Ballarini Gorgonzola is used twice in my appetizers, first in the stuffed dates, and then in the crostini topped with Gorgonzola and a Pear-Onion Jam. The pine nuts that are topped on the dates are also used in the Hummus, which to save time was the Sabra pre-made Hummus, which I buy on a weekly basis (especially the pine nut flavor).
Add a nice Feta Walnut spread that is super simple to make, and is made that much better with a few Diamond Walnuts candied on top. The Zeal Sauvignon Blanc pairs really well with the Feta Dip (lucky for me they had a chart of what wines go with what cheeses right at my Sam’s…because truthfully, I’m not skilled in that area :D).
The centerpiece, which is essentially a bunch of fruit. But the fruit doubles as part of the appetizer as pears, grapes, and apples all go lovely with cheese. Or even better, how about a cheese that already has fruit in it, the Wensleydale Cheese with Autumn Fruits has both currents and apples mixed into and aged with the cheese. Yummy.
And for dessert, I went with something that usually surprises people. Blackberry and Sparkling Wine Geletina. Geletina is a fancy way of saying Jell-O. Yep, wine Jell-O. I know it seems a little odd. But if you are a champagne or sparkling wine fan, you will really enjoy these. I made them a few years back with Prosecco but tried them this time with the Beciano Mocsato D’asti. Either work. These are light and refreshing and what is a better way to toast the New Year than with dessert!!!
So head on over to Sam’s Club this holiday season to help make you New Year’s Eve party Simple and Easy. And have a Fruitful New Year! Feel free to come talk a little New Year’s Eve party planning with me over on the Sam’s Club Facebook Page.
*As always, I was compensated for this post, was given a Sam’s Club membership, and a gift card to purchase the food that is in the post, but opinions are that of my own. 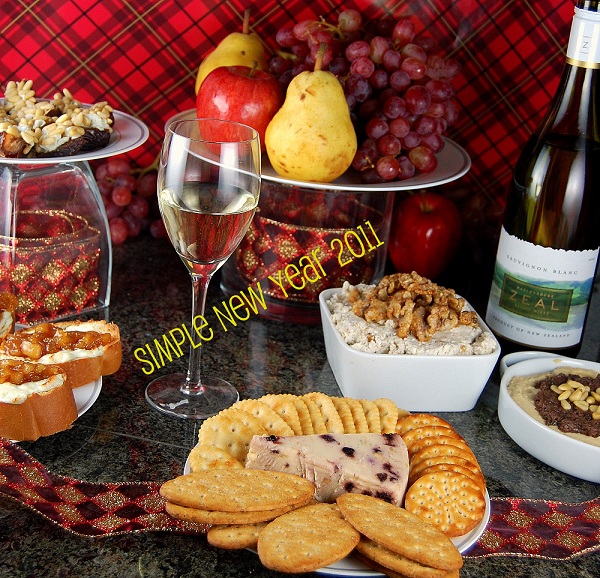 If you want to add a little extra cheer in your New Year, why not enter the Sam’s Club “New Year’s Eve Resolutions” Twitter Contest. It starts at 12:01 a.m. Eastern Standard Time (“EST”) on December 27, 2010 and ends at 11:59 p.m. EST on January 1, 2011.
You have the chance to win a 14-piece Cuisinart Cookware Set (Value $149.98)! I could use some new cookware right about now, how about you?
All you need is a Twitter account. Go to Sam’s Club Twitter page to become a follower of Sam’s Club. Tweet your response to the Contest question: “What New Year’s Resolution Have You Achieved?” using the hashtag #jumpstart and mentioning @Samsclub in the tweet. You have the option of tweeting their response on the Sam’s Club Twitter page OR their own Twitter page. However, the correct #jumpstart and @Samsclub must be present in the answer in order for the response to be counted as an Official Contest entry.
One entry per person. There is one winner and contest entry will be judged based on the clear relationship between the tweet and the following criteria: Originality (40%); Pertinence to Theme (40%); Difficulty (20%).
To see more info, go here. 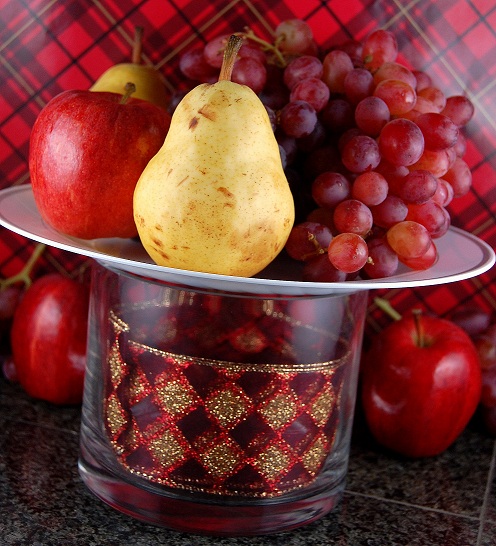 (My attempt at a centerpiece 😛) 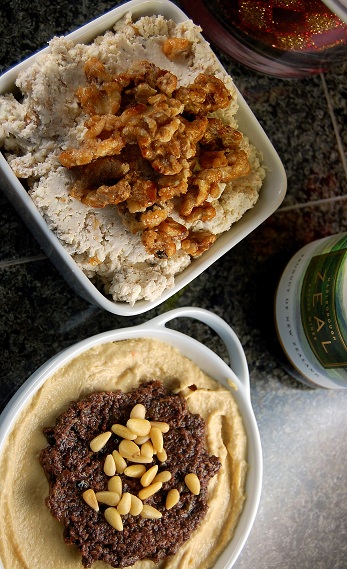 Using a food processor, blend all the ingredients until smooth. Place spread in bowl and top with candied walnuts.

Place a sheet of parchment paper onto a baking sheet.
Using a medium saucepan, add sugar. Use a wooden spoon or any heat resistant spoon to stir around to avoid clumps. Sugar will turn liquid and start to turn a nice brown color. Don’t go too dark or it will be bitter.
Toss nuts into the caramel sugar and coat the nuts with the caramel. Sprinkle sea salt.
Pour onto prepared pan to let them cool.

Place Hummus in a serving bowl. Place tapenade in center of dip and top with pine nuts. 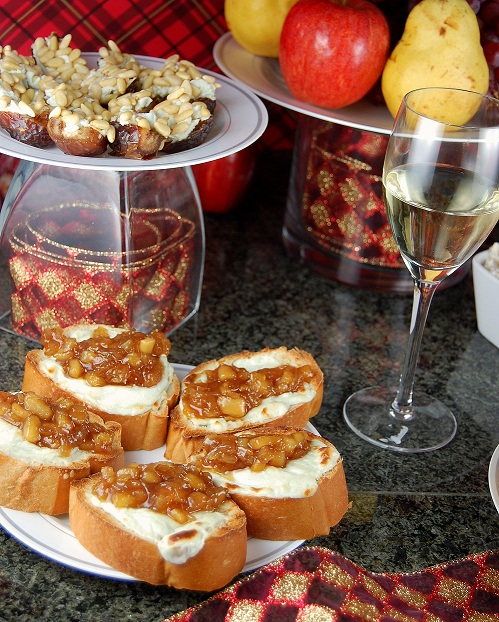 Crostini with Gorgonzola and Pear-Onion Jam

Using a stand mixer, blend together the cheese and spices until fully incorporated.
Pour pine nuts into a large shallow bowl.
Spoon or pipe cheese mixture into date half. Press cheese side into pine nuts, so that they stick to top. Serve at room temperature. Amount of appetizer depends on size of dates.