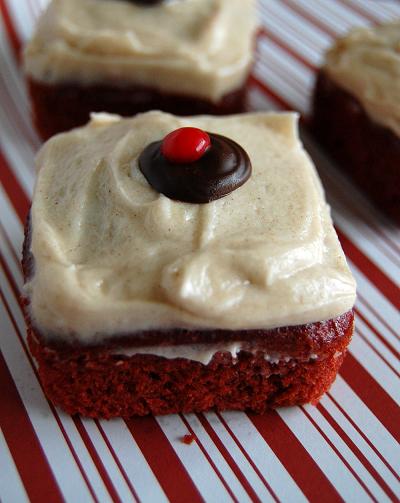 Sometimes we become a creature of habit, especially in the world of food. So often I order the same thing, I am most guilty of this when it comes to Chinese food. For even when I try to mix it up, I often find myself longingly looking over at someone who ordered one of my regulars. Then end up ordering it and taking it home for lunch the next day. When will I learn. 🙂
My husband often puts me into baking ruts. Chocolate chip cookies and red velvet cake…with cream cheese frosting. So when going through Baked I noticed that they have a version of red velvet cake that was called Red Hot. At first I was afraid they did the whole chocolate and chili thing which I am not a fan of that movement at all (Bobby Flay can keep that one) but it was just basic red velvet cake, but with a cinnamon frosting. Hmm, cinnamon frosting, I felt the need to give that a try (not to worry I made my husband plain old cream cheese frosting).
I must admit I am not sure if I was up for the change. I like the cinnamon flavor with the cake a lot but missed the tang of the cream cheese. I think next time I will make a hybrid of sorts using a cream cheese frosting with cinnamon. If you want to make the little Red Hot (where it got it’s name from) decoration you just simply melt some chocolate, pipe it through a bag, place a Red Hot on top, and stick in the fridge to set up.
I used a different red velvet cake (recipe here) but I included the frosting recipe if you want to break away from the normal standard. 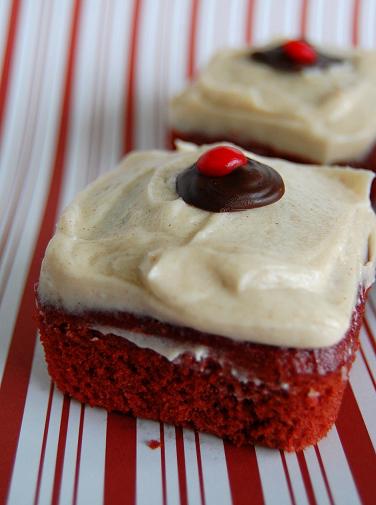 In a medium heavy-bottomed saucepan, whisk the sugar and flour together. Add the milk and cream and cook over medium heat, whisking occasionally, until the mixture comes to a boil and has thickened, about 20 minutes.
Transfer the mixture to the bowl of an electric mixer fitted with the paddle attachment. Beat on high speed until cool. Reduce the speed to low and add the butter; beat until thoroughly incorporated. Increase the speed to medium-high and beat until the frosting is light and fluffy.
Add the vanilla and cinnamon and continue mixing until combined. If the frosting is too soft, transfer the bowl to the refrigerator to chill slight, then beat again until tit is the propers consistency. If the frosting is too fir,, place the bowl over a pot of simmering water and beat with a wooden spoon until it is proper consistency. 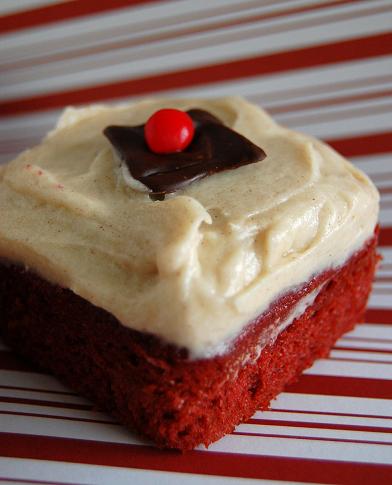 « An important message from the Fluff Ticket….
I know… »