I’ve joined another baking group. No, I have not left the Daring Bakers(all 500 and something of us…or maybe it is 600 now) but joined a group that is dedicated solely to baking Dorie Greenspan recipes. The first time I saw a post for Tuesdays With Dorie, I thought it was the cutest idea ever. We could spend years on Dorie recipes and never make a dent in all that she has to offer. If you read this blog you know that I am more than a Dorie fan, more like a Dorie worshiper. No other cookbook author seems to do what she does…offer near fool proof recipes in a language that the every day cook can understand. Having reviewed Baking From My Home to Yours, I know what an outstanding cookbook it is…I have recommend it to countless numbers of people and if you don’t have it you truly should.
Each week the group makes a recipe from Dorie…on Tuesdays. We are currently using the Baking From My Home to Yours but we have lots to choose from. This time around, April of Abby Sweets, selected the Black and White Chocolate Cake. It looks impressive though I must admit that I ran into a problem. A first for me with a Dorie recipe. Not really Dorie’s fault as it was my own. See, I am an over froster. I like frosting. Lots of frosting. From the picture it appeared that it was to be spread thinly…I just don’t do that. So naturally I ran out of frosting and had to make more…and I made a mini cake! I loved the actual buttermilk cake. I loved the chocolate filling. The white chocolate whipped cream was okay. I am not the biggest fan of white chocolate. I like it more of an accent than a main attraction. I know a lot of the girls had major issues with it. I don’t know what kind of white chocolate they used but you have to have high enough quality of white chocolate to make this work. The book suggested Valrhona, which is what I used. This is no time to use Bakers chocolate.
Presentation wise it is lovely. You have to be pretty good at cutting cake layers though as this cake has four. Like I said, I made mini ones. Again using my 4 ½ -inch diameter spring form pans. To make it easier to cut, my cooled cakes were placed in the freezer for 30 minutes. Then I used toothpicks to mark where I wanted to cut the cake. They aren’t perfect but they were decent enough. Some people swear by using dental floss. This method doesn’t work that great for me.
If I were to make this cake again I would do all of the layers in the chocolate, omit the white chocolate all together and go with a chocolate Buttercream frosting…but then it wouldn’t be as pretty.
To see a list of who is in the Tuesdays with Dorie group, visit the website so you can see what the other members did. 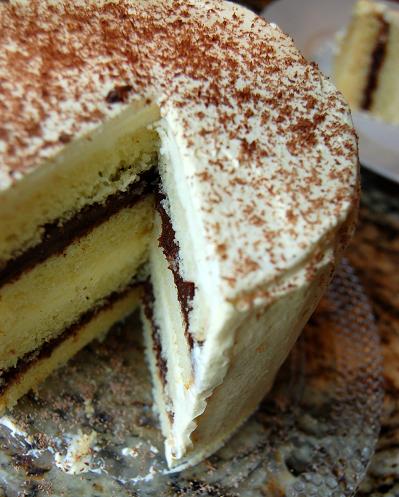 6 oz. premium quality white chocolate
1 1/2 cups heavy cream
Getting ready: Center a rack in the oven and preheat the oven to 350 degrees F. Butter two 9X2 inch round cake pans, dust the insides with flour, tap out the excess and line the bottoms of the pans with parchment or wax paper. Put the pans on a baking sheet.

To make the cake: Sift together the cake flour, baking powder, baking soda and sal t.

Working with a stand mixer in a large bowl, beat the butter on medium speed until soft and creamy. Add the sugar and beat for another 3 minutes. Add the eggs one by one, and then the yolk, beating for 1 minutes after each addition. Beat in the vanilla; don’t be concerned if the mixture looks curdled. Reduce the mixer speed to low and add the dry ingredients alternately with the buttermilk, adding the dry ingredients in 3 additions and the milk in 2 (begin and end with the dry ingredients); scrape down the sides of the bowl as needed and mix only until the ingredients disappear into the batter. Divide the batter evenly between the two pans and smooth the tops with a rubber spatula.

Bake for 28-30 minutes, rotating the pans at the midway point. When fully baked, the cakes will be golden and springy to the touch and a thin knife inserted into the centers will come out clean. Transfer the cakes to a rack and cool for about 5 minutes, then unmmold, remove the paper and invert to cool to room temperature right side up on the rack.

To make the dark chocolate cream: Bring the milk to a boil. Meanwhile, in a large heavy-bottomed saucepan, whisk the egg yolk with the sugar, cornstarch and salt until thick and well blended. Whisking without stopping, drizzle in about 1/4 cup of the hot milk-this will temper, or warm, the yolks so they won’t curdle-then, still whisking, add the remainder of the milk in a steady stream. Put the pan over meduim heat and, whisking vigorously, constantly and thoroughly (make sure to get into the edges of the pan), bring the mixture to a boil. Keep at a boil, still whisking, for 1-2 minutes. Remove the pan from the heat.

Whisk in the melted chocolate, and let stand for 5 minutes. Then whisk in the pieces of butter, stirring until they are fully incorporated and the chocolate cream is smooth and silky. Press a piece of plastic wrap against the surface of the cream to create and airtight seal and refrigerate the cream until chilled, or for up to 3 days. Or, if you want to coool the cream quickly, put the bowl with a cream into a larger bowl filled with ice cubes and cold water and stir the cream occasionally until it is thoroughly chilled, about 20 minutes.

When the white chocolate is melted, remove the bowl from the pan. Pour the hot cream into the melted chocolate and let it sit for a minute. Using a small spatula, stir the chocolate gently until it is smooth. Let it sit on the counter until it reaches room temperature-it can’t be the least warm when you add it to the whipped cream.

Working with the stand mixer with the whisk attachment or with a hand mixer in a large bowl, beat the remaining 1 cup of heavy cream only unti l it holds the softest peaks. Turn the machine to high, add the cooled white chocolate all at once and continue to beat until the whipped cream holds firm peaks. Turn the whipped cream into a bowl, press a piece of plastic wrap gently against the surface to create an airtight seal and refrigerate for at least 2 hours, or up to 6 hours.

To assemble the cake: If the tops of the cake layers have crowned, use a long serrated knife and a gentle sawing motion to even them. Slice each layer horizontally in half. Place on layer cut side down on a cardboard cake round or on a cake plate protected by strips of wax or parchment.

Refrigerate for at least 3 hours, or overnight.

Source: Adapted from Baking: From My Home to Yours by Dorie Greenspan, Houghton Mifflin Company, November 2006 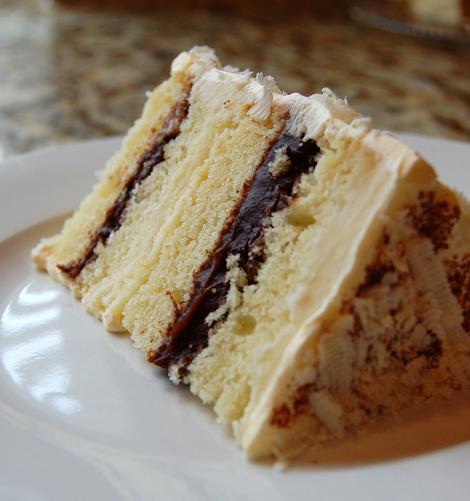