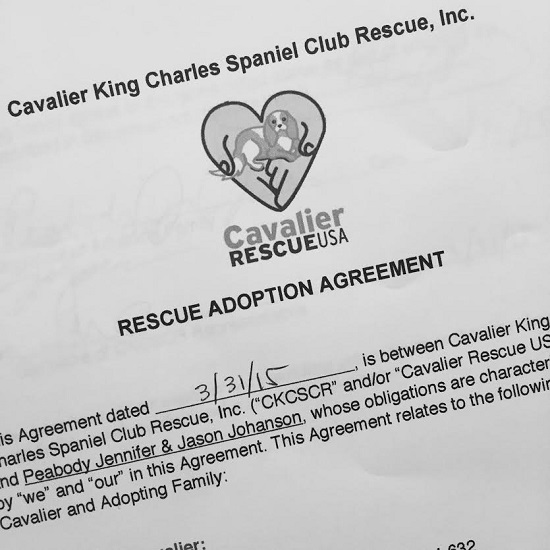 My 1 year wedding anniversary is April 12th. It’s honestly been such a crazy year that I can’t believe it’s already here. It was probably one of my hardest 12 months of my life though not in the way of marriage, if anything my marriage is stronger due to the year we had. Suddenly having to move, dealing with difficult ex-landlords, financial stress of having to pay for two places at once (looong story), CCS string of illnesses, MDP’s father passing, CCS passing, you name it.

Last year MDP and I had decided that with CCS turning 14 that we wanted another dog. The plan was to get rescue spaniel, preferably a King Charles Cavalier Spaniel about 3-5 years old and then after CCS passed start taking on final refuge dogs for Old Dog Haven.

Well as soon as we started looking CCS got Old Dog Vestibular Disease and her myriad of illnesses started. We decided not to upset her by getting another dog. At Christmas when I just knew deep down that something was really wrong with her we decided we would start looking on Cavalier Rescue and Petfinder not super seeking but that if a dog spoke to me for us to go and explore it.

In CCS’s declining days MDP and I agreed we would start looking right away. That no dog can replace CCS as she is one of a kind and we would not want another one of her but that we are people that need a dog in their life. But that we wouldn’t get a dog to get a dog it had to be one I felt a connection to. The only dog that sort of spoke to me was a cocker down in San Francisco, so the likelihood of getting her wasn’t going to happen.

The day after CCS passed I got up and looked at the Cavalier Rescue USA website and there was a picture of a Cavalier that became available that day…he spoke to me…big time. I read his sad little story and my bleeding heart felt for him. His owner died and the family gave him away to a shelter. Then he was returned twice back to the shelter before Cavalier Rescue got ahold of him. Why return him? He was growly towards men, was grouchy, and didn’t want to be pet or sit on anyone’s lap. He didn’t have an easy going Cavalier behavior.

Cavalier Rescue got ahold of his vet records and discovered he was grouchy and didn’t want to be touched because he has a very painful vertebrae condition and was in pain, on top of losing the only owner he ever knew and going to two different places. So he had an MRI and was found to have a very common Cav condition called Chiari-Malformation Syringomyelia…which has to do with overbreeding and being a smaller dog. He’s on nerve blocker and pain meds now (will be his whole life) and his disposition has softened greatly.

Ironically the woman fostering the dog is a friend of a friend who I had actually talked to about renting her vacation home a few years back. I talked to her and decided to meet him. MDP was super worried that the dog growls at his foster dad when he comes home from work (but only then at night) since MDP is really involved in our pet’s lives. The foster mom sent photos and video of the dog, I felt like it was online dating in a way. MDP was nervous that the dog couldn’t walk or something along those lines due to his neck/back issue so she sent videos of him running and walking (he walks 30-45 minutes daily). After I got the first video I sent it to MDP at work. He wrote about an hour later admitting he had watched it 8 times already. So we made a date to meet him.

We met up with him and his foster mom and met on neutral territory since most rescue dogs do best when meeting people that way. I’m not sure what I was expecting but he was far more friendly then what I had in my mind and not a growl was heard. He sat in both MDP and my lap and walked around with us for an hour and a half. We left very smitten and made a date for him to come over to our house to see how he did over here. And we were told that we would probably have about 4 meetings total.

He came over Saturday morning and was here just shy of 2 hours. He was very relaxed the whole time. Peed in the back yard. Checked out the house but mostly enjoyed our large couch, and when I say large I mean it (8-x-12-x-6 ft.). He is very motivated by food (yes he is overweight we are working on it), so luckily whoever has the food wins so he will go to you if you hold the magic tiny treats. 🙂

He again did really well with MDP and at one point the foster mom made a face and I thought something was wrong and she said “oh no, it’s just that he pawed at MDP and he only ever does that to us”. The dog puts a paw on you when he wants your attention. And he put a paw on MDP when MDP didn’t have food, he was just petting him and stopped, and he wanted more. I could tell by the look in my husband’s eyes that he was in. Well it went so well that they felt if we were ready that they would prepare the documents for us to take him. We asked him if he wanted to join our family and warned him that we are like the mafia and once you are in this family you are in it for life! 😀

So for our first wedding anniversary we are giving each other the traditional gift of paper: adoption papers.

I give to you our newest family member: Mr. Squishy Face or MSF as he will be referred to now on here on the blog. 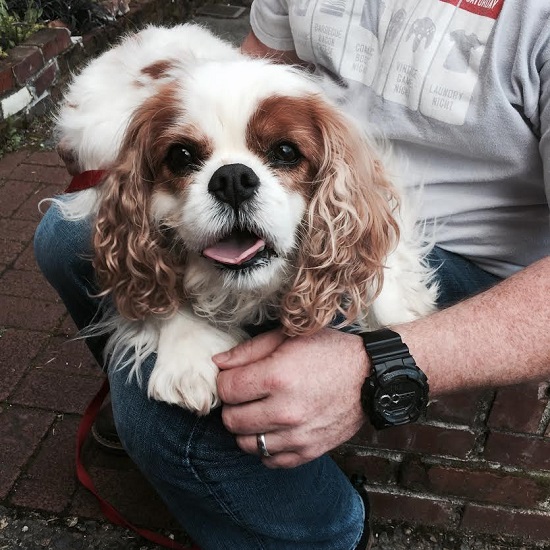 Mr. Squishy Face just turned 8. Ironically I found out last week that we have always celebrated (for the last 14 years) CCS’s birthday on March 13th (because that’s what the rescue people said) but that going through all her records after she passed turned out that her birthday was March 1st. MSF’s birthday is March 1st. So in a way I felt with him popping up the day after she passed, him being the foster of a mutual friend, and then the birthday being the same it was CCS’s way of saying help this one mom, he needs you. He is almost completely deaf and so we are going to have to work on a hand signal system. He has the back issue which we will have to be readjusting meds throughout his life and possibly surgery (though I don’t like the odds of the surgery) and of course is just aging in general. He will also have some separation anxiety as he has been with his foster family since November. I’m figuring it will take about 6 months or so for him to be okay with everything. He will probably end up having his own blog so that other dog owners who have his condition can benefit from what we learn along the way. And since he does have so many health issues we are considering him our final refuge dog in a way (though we feel he has a few good years in him) and will eventually end up with two dogs.

As far as how we are doing with CCS’s death, surprisingly well. Part in fact that we cried a WHOLE bunch before her death. MDP ugly cried for the first time in his life the weekend before she crossed the Rainbow Bridge. The fact that it wasn’t sudden we were able to prepare, though you are never fully prepared. And the way she went, I cannot say enough about the vet (Dr. Sara) that came to our home to euthanize CCS. It was loving and peaceful and she is an amazing woman. She also does acupuncture which we might look into for MSF down the road. Both MDP and I agree that doing that here at home has helped immensely in our healing. If you are local (north of Seattle) and have the unfortunate position of having to put your beloved fur-family down I cannot recommend Compassion 4 Paws enough.

I still tear up about twice a day, but the hard core bawling hasn’t happened since the day she actually passed. I thought for sure I would lose it when the vet brought her ashes back but mostly I was just glad to have a part of her “back”. MDP and I did cry and hold each other when we had a little ceremony when we put her on the mantle and read this poem:

I Loved You Best:
So this is where we part my friend,
And you’ll travel on around the bend,
Gone from sight but not from mind,
New pleasures there you’ll surely find.
I will go on, I’ll find the strength
Life measures quality not its length.
One long embrace before you leave,
Share one last look before I grieve.
There are others, that much is true,
But they be they and they aren’t you,
And I fair, impartial, or so I thought,
Will remember well at all you’ve taught.
Your place I’ll hold you will be missed,
The fur I stroked the nose I kissed.
And as you journey to your final rest,
Take with you this… I loved you best.
By Jim Willis

Because we had such a positive in home experience I want other dog owners to have that option to euthanize at home. It’s not a cheap option and so MDP and I discussed it and I am going to write a E-book in which a percentage of the profits will be going towards a fund that we are going to set up (hopefully through Old Dog Haven…I’ll work on it when we raise some funds) in honor of CCS. And if we raise enough money perhaps the fund can including helping those who take in senior pets with health issues that arise and they cannot afford. I plan on working all summer on the book so that it can be out in time for fall baking season. I’m hoping you will support this project wholeheartedly because I will be putting my whole heart into it…CCS deserves nothing less.