1. Stayed up until 1 something in the morning Saturday night doing my taxes. I think I invented new swear words. The IRS says food bloggers are a business yet sadly I don’t get any of the benefits of having a home office as it gets used for other things like paying my bills on line. So I get to owe them money. Sigh.

2. Jury duty. Got out of it! Yay! Well didn’t get out of it they just never got to my group number and I was therefore released as of this afternoon!

3. After nine seasons of going to the championship and losing to the same team time in and time out my hockey team finally won in sudden death shoot out. Normally I don’t actually care about winning but darn that felt good. Especially because those guys HATE to lose.

4. People keep asking how the wedding planning is coming along. It’s not. :S See number one. Keep owing people money so can’t save to have one. And while MDP is all about us just going and getting hitched so I can be his wife he didn’t get a real wedding the first go around and doesn’t have fond memories at all. Even though I am no longer married to picky eater I still have fond memories of the very nice wedding we had.

5. April is National Autism Awareness Month. It’s important to me as MDP’s son is on the spectrum, my BFF has a son with autism, and as a former teacher I feel that kids with Autism are very misunderstood. Please educate yourself more about those who have Autism. I had planned on doing a local run/walk this weekend that the local high school where MDP’s teenagers go to but I tweaked my knee somehow last week and don’t think that is the best idea…at least they got my money.

6. I think more than any chore I wish someone would come and do for me it is fold and put away laundry! What about you…what chore to you hate?

7. Don’t forget you only have two days left to enter your chance to win mini tart pans…you know you want to. Just make sure you live in the US please.

8. This recipe came about when years ago I went to a restaurant in Portland called Wildwood. They have a cookbook but the pizza I had was not in it. I loved it. The caramelized onions and gruyere and Gouda was just too good for words. I didn’t exactly match it but mine turned out really well. It’s a great alternative to your “normal” pizza. I like to make minis of these and use them as appetizers for parties. 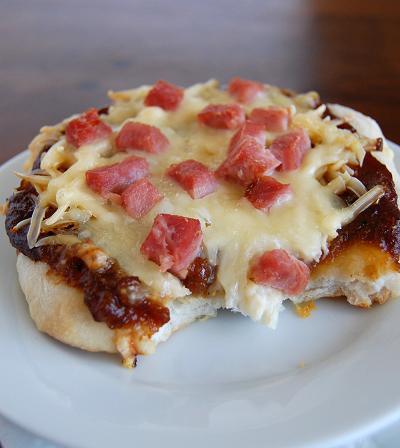 Brush large bowl lightly with olive oil. Mix 2 cups flour, sugar, and salt in processor. Add yeast mixture and 3 tablespoons oil; process until dough forms a sticky ball. Transfer to lightly floured surface. KNEAD dough until smooth, adding more flour by tablespoonfuls if dough is very sticky, about 1 minute. Transfer to prepared bowl; turn dough in bowl to coat with oil. Cover bowl with plastic wrap and let dough rise in warm draft-free area until doubled in volume, about 1 hour. PUNCH down dough. DO AHEAD Can be made 1 day ahead. Store in airtight container in refrigerator. ROLL out dough according to recipe instructions. (Start in center of dough, working outward toward edges but not rolling over them.)

Saute onions in oil until brown. Reduce heat and cook until glazed.
Add pears, vinegar, sugar, cayenne and salt. Cook till pears are tender.
Remove mixture and simmer juice until a thick glaze.
Put both the onion peas mixture and juice(now a glaze) into blender. Pulse until if forms sauce consistency.

To make the pizza:

On a lightly floured surface pat out dough evenly with your fingers, keeping hands flat and lifting and turning dough over several times, into a 9-inch round. (Do not handle dough more than necessary. If dough is sticky, dust it lightly with flour.) You can also do mini pizzas, which is what I did.

Dust a baker’s peel or rimless baking sheet with flour and carefully transfer dough to it. Jerk peel or baking sheet once or twice and, if dough is sticking, lift dough and sprinkle flour underneath it, reshaping dough if necessary.

Bake without topping for 5 minutes. Remove from oven and spread on sauce. Sprinkle with cheese and ham and place back into oven for another 3-5 minutes until things get bubbly. 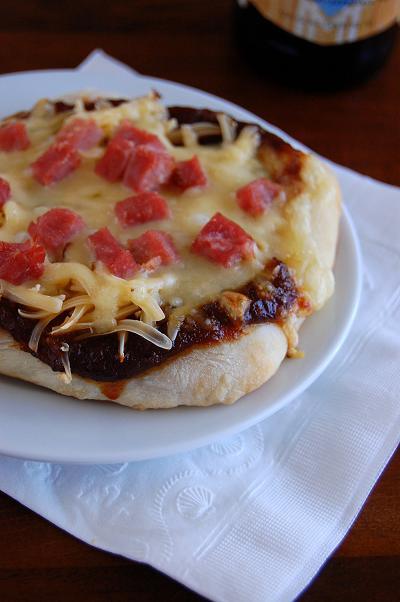