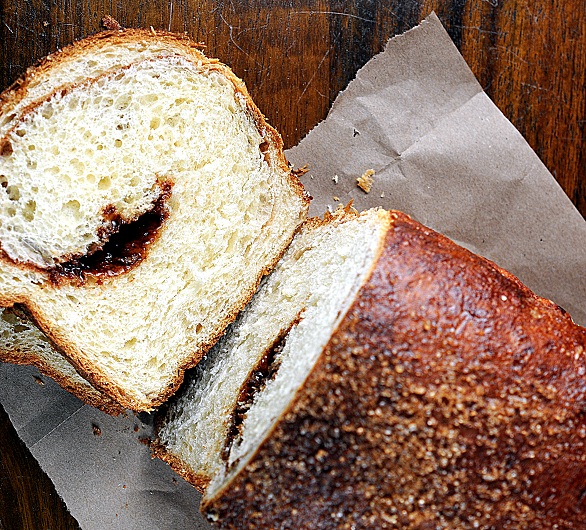 Some of you saw on FB my yummy looking French Toast we made yesterday for the kids. Funny story: I kept telling everyone that I had made Cinnamon Raisin Brioche…because I thought I had. Until I sliced it open only to realize that I did not make Cinnamon Raisin Brioche just Cinnamon Swirl Brioche. Oops. So I quickly scanned the kitchen and sure enough over in the corner was the little bowl of raisins all measured out. 🙂 Dear mind…where have you gone? Please come back.

Nonetheless that was some serious insanely good French toast and totally worth me making the bread for it. And yes, I made the bread purposefully just to be made into French toast. MDP thinks it’s cool and slightly mental all at the same time that I do things like that. If baking bread purposefully for French toast is the most crazy thing I do I think we are all doing alright. And of course to make it better for us we made sure to use heavy cream instead of milk in our French toast egg batter. 😛

I had a crazy fun day yesterday that I will post pictures about in my next post but oddly enough the majority of my day has been spent taking timed multiplication test for 3’s and 9’s for MDP’s step son. It’s amazing how your brain freezes when you take those. But luckily we keep taking one every hour and each time my time keeps improving. 🙂

This is a wonderful bread and will make two loaves. Or you can make one loaf and use the other to make sticky buns or cinnamon rolls. 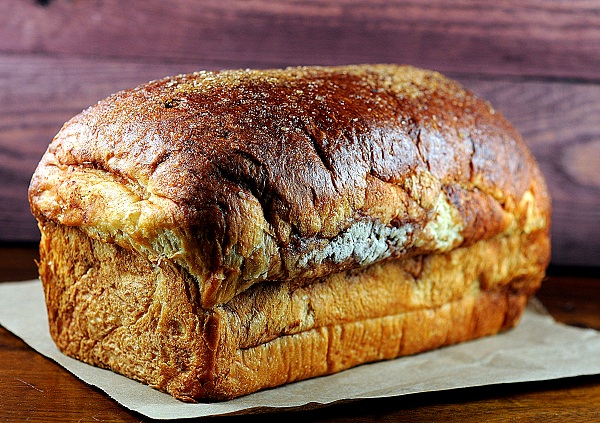 To Make The Brioche: Put the yeast, water and milk in the bowl of a stand mixer and, using a wooden spoon, stir until the yeast is dissolved. Add the flour and salt, and fit into the mixer with the dough hook, if you have one. Toss a kitchen towel over the mixer, covering the bowl as completely as you can– this will help keep you, the counter and your kitchen floor from being showered in flour. Turn the mixer on and off a few short pulses, just to dampen the flour (yes, you can peek to see how you’re doing), then remove the towel, increase the mixer speed to medium-low and mix for a minute or two, just until the flour is moistened. At this point, you’ll have a fairly dry, shaggy mess.

Scrape the sides and bottom of the bowl with a rubber spatula, set the mixer to low and add the eggs, followed by the sugar. Increase the mixer speed to medium and beat for about 3 minutes, until the dough forms a ball. Reduce the speed to low and add the butter in 2-tablespoon-size chunks, beating until each piece is almost incorporated before adding the next. You’ll have a dough that is very soft, almost like batter. Increase the speed to medium-high and continue to beat until the dough pulls away from the sides of the bowl, about 10 minutes.

Transfer the dough to a clean bowl (or wash out the mixer bowl and use it), cover with plastic wrap and leave at room temperature until nearly doubled in size, 40 to 60 minutes, depending upon the warmth of your room.

Deflate the dough by lifting it up around the edges and letting it fall with a slap to the bowl. Cover the bowl with the plastic wrap and put it in the refrigerator. Slap the dough down in the bowl every 30 minutes until it stops rising, about 2 hours, then leave the uncovered dough in the refrigerator to chill overnight.

Divide the dough into two pieces. Handle it gently. With each piece of dough in turn, flatten it out into a rectangle. The short side should be a little shorter than the length of your loaf pan and the long side about one and a half times this.

Mix together well the sugar and cinnamon.

Brush the dough with some of the melted butter and sprinkle on a layer of the cinnamon sugar.

Starting with the short side, roll the dough up tightly and pop it in your lined loaf pan. Cover with oiled plastic and leave in a warm place to rise to double the size. This will take from about 30 minutes depending on the temperature of the room.

Do the same with the other piece of dough.

Make an egg wash of the egg and water.

Once the dough has risen, brush egg wash on loaves and sprinkle some Demera sugar. Then place it in the preheated oven for about 25-35 minutes until brown. I’d then take the brioche out of the loaf pan, turn it upside down and allow it to bake for another 5 minutes or so until it is firm all round.

Adapted from Baking From My Home to Yours by Dorie Greenspan 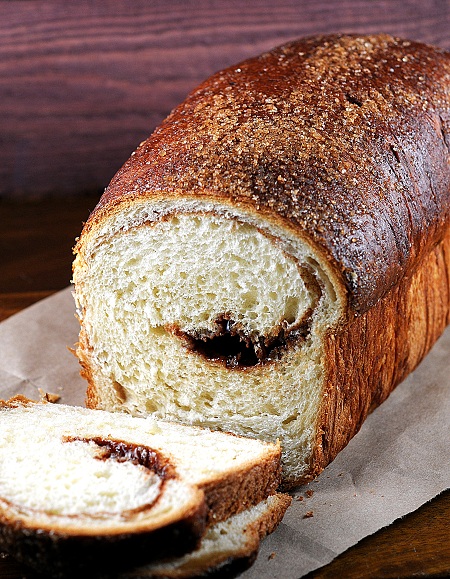