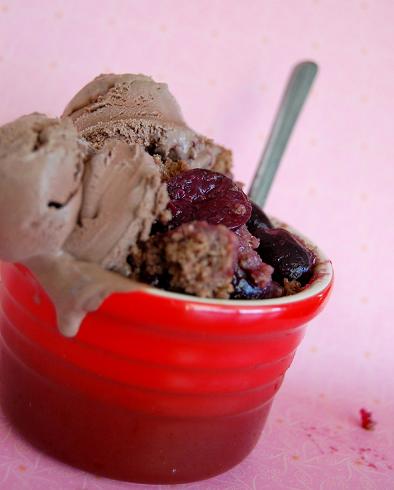 This week’s TWD pick is Cherry Rhubarb Cobbler(chosen by Amanda of Like Sprinkles on a Cupcake). Rhubarb has come and gone(at least the good looking stuff) around these parts so I went with all cherries. Especially since cherries are cheap around these parts. And cheap right about now sounds good. I really seems this week when I was at Costco that I really noticed a price hike. My cream that was $4.79 a half gallon(yes, that is right I go through, not one, but two ½ gallons a month…easily) is now $6.49. That is quite a jump in a month.
Oh my.
In fact the only things that still seem to be relatively cheap of course is snack food. So when you start seeing me get creative with Pop Tarts on here you know my grocery budget is shot. 🙂
In my last post about being child free(btw…who knew there were so many of you non-breeders out there, I don’t feel so alone) some one left a comment about a movie called Idiocracy. They wondered if I had seen it. I have. It’s one of my husband and I’s favorite movies for the sheer fact that we can totally see it happening. The plot is described as this(or you can read a much longer recap here):

Joe Bauers, an Army librarian, is judged to be absolutely average in every regard, has no relatives, has no future, so he’s chosen to be one of the two test subjects in a top-secret hibernation program. He and hooker Rita were to awaken in one year, but things go wrong and they wake up instead in 2505. By this time, stupid people have out bred intelligent people; the world is (barely) run by morons–and Joe and Rita are the smartest people in America.

They wake up in a world that is beyond lazy. No one drinks water they drink the equivalent to Gatorade(which won a government contract through lots of lobbying). It is in everything from drinking fountains to what the water crops with(crops that wont grow). Garbage is everywhere. Toilets are built into their chairs so they don’t have to get up. The language has been dumbed down so much that they all talk like Brittany Spears when she is loaded. Speaking of Spears, the whole way this came about was that the less intelligent were the ones breeding and the more intelligent individuals either waited until it was too late or didn’t have children at all. Thus, causing the population to slowly but surely dumb itself down.
Now before you leave me hate mail, I am not saying that if you have kids you are dumb. Sooo not where I was going with this. I think you know the difference between the type of person I am talking about, they are the people who end up on Jerry Springer and say “I just went to the bathroom one day and out popped a baby, I didn’t even know I was pregnant.” These are the people popping out 5 or 6 kids that make me nervous. Top that with snack food being the only thing that is cheap these days and we wont be that far off from the movie’s portrait of the world come 2505.
Back to the food and speaking of cheap, I got me some free chocolate awhile back at a Seattle Food Bloggers meet up. Quite the variety, with one really interesting one being a Coconut Curry Milk Chocolate. Hmmm. I thought long and hard about how to use it. I thought either custard or ice cream. Ice cream won out. I decided to pair it with the cherry cobbler so that I could give you a recipe this week. Since it was a chocolate ice cream, I went ahead and made the cobbler topping chocolate as well. I simply added 2 heaping TBSP of unsweetened cocoa powder to the mix as well as another ¼ cup of sugar. The curry is pretty subtle for those of you who are wondering. And thoughit is a little out there, the flavors did work well with the cherry cobbler, probably not with a cherry rhubarb cobbler though. 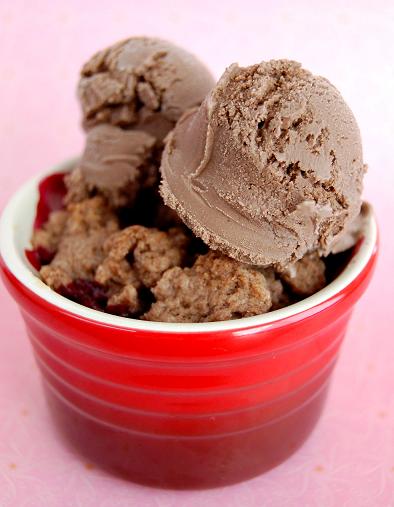 The chocolate I used comes from Theo Chocolates here in Seattle. 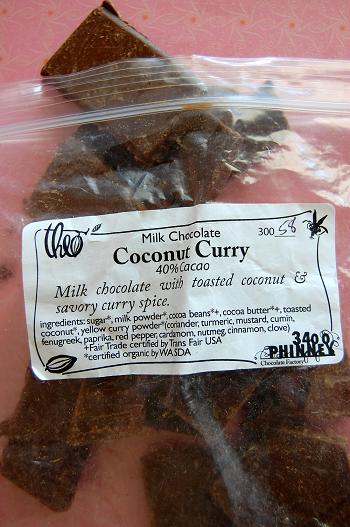 Chop chocolate. In a heavy saucepan whisk together sugar and cocoa powder until combined and whisk in cream and milk. Bring mixture just to a boil, stirring occasionally. In a bowl beat yolks until smooth. Add hot cream mixture to yolks in a slow stream, whisking, and pour into pan. Cook custard over moderately low heat, stirring constantly, until a thermometer registers 170° F. Remove pan from heat and add chopped chocolate, whisking until melted. Pour custard through a sieve into a clean bowl and cool. Chill custard, its surface covered with plastic wrap, at least 3 hours, or until cold, and up to 1 day.
Transfer custard to bowl of a standing electric mixer and beat just until thick and fluffy. Freeze custard in an ice-cream maker. Transfer ice cream to an airtight container and put in freezer to harden. Ice cream may be made 1 week ahead. 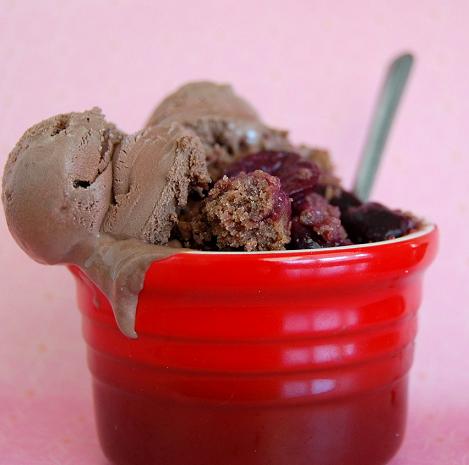