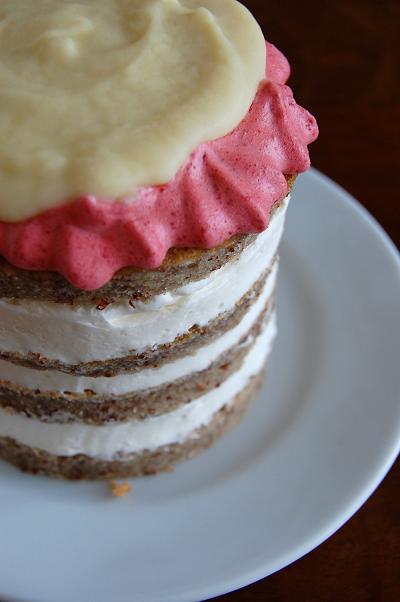 April 30th I made a cake. I spent a good portion of my day on said cake. A GOOD portion. I made an Opera cake. It was rather a pain in the butt, I will not lie to you. So imagine my delight when I read that we were making Opera cakes as the Daring Bakers challenge. I thought yes, for once I will be ahead of the game, oh happy day. I didn’t read the rest of the post and went on with my happiness, not worrying about it.
Checking our website(the DB one) I started noticing that everyone’s Opera cakes all had white glaze on top. Odd, I thought. I went back and read the recipe/instructions. You want to hear somebody swear? I out rivaled ANY swearing I do for hockey, I was that pissed. “I don’t to make this f#%king thing again!!!” I professed loudly(you see it could not be dark in color…and mine was chocolate). And I really didn’t want to. I considered not doing the challenge at all or just being a rebel and submitting the chocolate one.
Suddenly I had an angel on one shoulder and a devil on the other. The angel was telling me to be a good Daring Baker. I have never missed a challenge and I have been a Daring Baker since the beginning, well not the pretzels, but right after that. So not doing it was out of the question. Then the devil spoke up. It was telling me just to submit the chocolate one. I spent so much time on it why not? Other people have been bad and not followed the rules, why not you? That is what I decided. I will submit the chocolate one. Be the rebel…without a cause.
Only problem was, there was a cause. A pretty good one. Barb. Barbara of Winos and Foodies is a cancer survivor who hosts LiveSTRONG with a Taste of Yellow event. That is why the Opera cake was to be light in color. In honour of Barb. Nope, I thought. I am still being a rebel.
Then came the guilt. Oh how it ate away at me. And so swearing up a storm at 3 am a couple nights ago when I could not sleep I got up and baked that cake. I actually made it without flour for my friend that is wheat intolerant. It turned out just fine since there was little flour to begin with in this recipe. My syrup was lemon flavored as was my buttercream. My mousse was my only rebellion since it was pink(strawberry)…but I did that in honour of my mom, the breast cancer survivor so I figured it was still in the theme.
Sadly I wish I would not made the first Opera cake. I would have so enjoyed making this more than I admittedly did. But I am not all that sad, as the first Opera cake I made was tasty. 🙂 This one was too but I love me some chocolate a little more than lemon and strawberry.
Sorry to Ivonne, Lis, Fran and Shea for thinking of being a bad girl. 😛 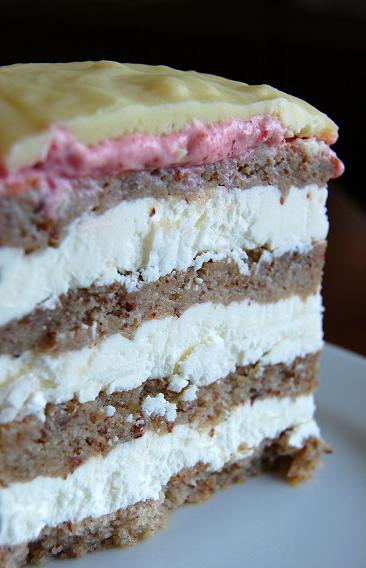 In the bowl of a stand mixer fitted with the whisk attachment (or using a handheld mixer), beat the egg whites until they form soft peaks. Add the granulated sugar and beat until the peaks are stiff and glossy. If you do not have another mixer bowl, gently scrape the meringue into another bowl and set aside.

If you only have one bowl, wash it after removing the egg whites or if you have a second bowl, use that one. Attach the paddle attachment to the stand mixer (or using a handheld mixer again) and beat the almonds, icing sugar and eggs on medium speed until light and voluminous, about 3 minutes.

Add the flour and beat on low speed until the flour is just combined (be very careful not to overmix here!!!).

Using a rubber spatula, gently fold the meringue into the almond mixture and then fold in the melted butter. Divide the batter between the pans and spread it evenly to cover the entire surface of each pan.

Put the pans on a heatproof counter and run a sharp knife along the edges of the cake to loosen it from the pan. Cover each with a sheet of parchment or wax paper, turn the pans over, and unmold.

Carefully peel away the parchment, then turn the parchment over and use it to cover the cakes. Let the cakes cool to room temperature.

For the soaking syrup:

Stir all the syrup ingredients together in the saucepan and bring to a boil.

Remove from the heat and let cool to room temperature.

1 cup (100 grams) granulated sugar (Used to say 2 cups but should be 1 cup)
¼ cup (60 grams) water (Used to say ½ cup but should say ¼ cup)
seeds of one vanilla bean (split a vanilla bean down the middle and scrape out the seeds) or 1 tbsp. pure vanilla extract
1 large egg
1 large egg yolk
1¾ sticks (7 ounces; 200 grams) unsalted butter, at room temperature (Used to say 1¾ cups of butter but it should be 1¾ sticks).
flavouring of your choice (a tablespoon of an extract, a few tablespoons of melted white chocolate, citrus zest, etc.)

Combine the sugar, water and vanilla bean seeds or extract in a small saucepan and warm over medium heat just until the sugar dissolves.

While the syrup is heating, begin whisking the egg and egg yolk at high speed in the bowl of your mixer using the whisk attachment. Whisk them until they are pale and foamy.

When the sugar syrup reaches the correct temperature and you remove it from the heat, reduce the mixer speed to low speed and begin slowly (very slowly) pouring the syrup down the side of the bowl being very careful not to splatter the syrup into the path of the whisk attachment. Some of the syrup will spin onto the sides of the bowl but don¢â¬â„¢t worry about this and don¢â¬â„¢t try to stir it into the mixture as it will harden!

Raise the speed to medium-high and continue beating until the eggs are thick and satiny and the mixture is cool to the touch (about 5 minutes or so).

While the egg mixture is beating, place the softened butter in a bowl and mash it with a spatula until you have a soft creamy mass.

With the mixer on medium speed, begin adding in two-tablespoon chunks. When all the butter has been incorporated, raise the mixer speed to high and beat until the buttercream is thick and shiny.

At this point add in your flavouring and beat for an additional minute or so.

Refrigerate the buttercream, stirring it often, until it¢â¬â„¢s set enough (firm enough) to spread when topped with a layer of cake (about 20 minutes).

Melt the white chocolate and the 3 tbsp. of heavy cream in a small saucepan.

Stir to ensure that it¢â¬â„¢s smooth and that the chocolate is melted. Add the tablespoon of liqueur to the chocolate and stir. Set aside to cool completely.

In the bowl of a stand mixer, whip the remaining 1 cup of heavy cream until soft peaks form.

Gently fold the whipped cream into the cooled chocolate to form a mousse.

If it¢â¬â„¢s too thin, refrigerate it for a bit until it¢â¬â„¢s spreadable.

If you¢â¬â„¢re not going to use it right away, refrigerate until you¢â¬â„¢re ready to use.

Melt the white chocolate with the heavy cream. Whisk the mixture gently until smooth.

Let cool for 10 minutes and then pour over the chilled cake. Using a long metal cake spatula, smooth out into an even layer.

Place the cake into the refrigerator for 30 minutes to set. 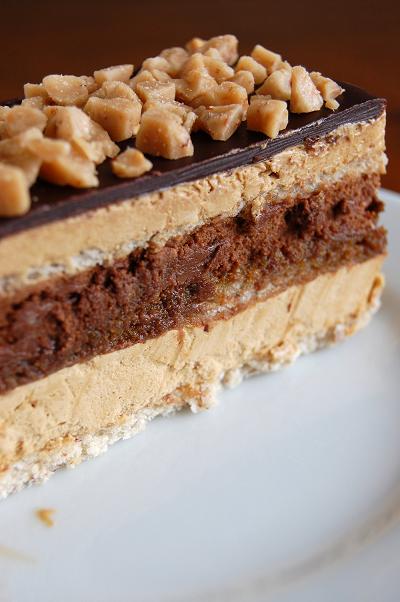 And just to be slighty rebellious…here is my contraband Opera cake with all the colors we were not suppose to have. It was Chocolate, Coffee and Toffee!