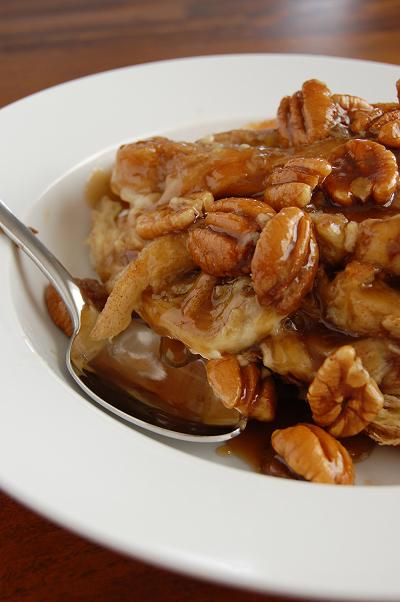 Having already made this weeks Tuesday’s with Dorie pick(about a year and a half ago) I was originally going to pass. Give myself a break. However, this was one of my favorite recipes out of the book and so I wanted to make it again. I just didn’t want to make the same way. That seems to be happening a lot to me lately.
Since I am a bread pudding loving fool, I figured why not take the 3 sticks of butter brioche and make it even worse for you by adding eggs and heavy cream? Yes, lets.
So that is what I did. I made Sticky Bun Bread Pudding. And it was good. And what is even better is the sauce is already there…right on the bottom. To make the bread pudding you have instead of making buns, make the two loaves of bread. Just put the filling in the bread before you roll it up. The rest is just like making regular bread pudding, well, except for the fact that you have the sticky pecan glaze at the bottom.
If you haven’t made the regular sticky buns yet, then definitely do that first. But if you have made it already and want a slight twist with still the same flavors and even more calories(I’m so skilled at that), then this here bread pudding is for you!
Thanks to Madam Chow of Madam Chow’s Kitchen for picking on of my favorites from the book. 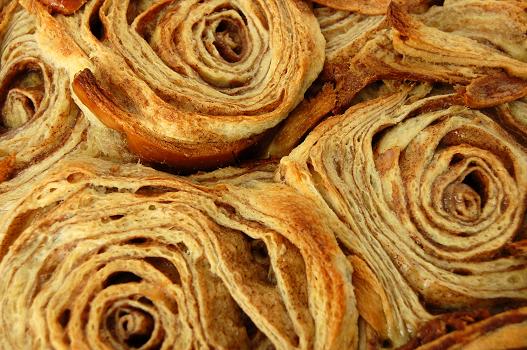 Put the yeast, water, and milk in the bowl of a stand mixer and, using a wooden spoon, stir until the yeast is dissolved. Add the flour and salt, and fit the mixer with the dough hook, if you have one. Toss a kitchen towel over the mixer, covering the bowl as completely as you can to keep you from being covered in flour! Turn the mixer on and off in a few short pulses, just to dampen the flour (you can peek), then remove the towel, increase mixer speed to medium-low and mix for a minute or two. At this point you will have a dry, shaggy mess (it¢â¬â„¢s true).

Scrape the sides and bottom of the bowl with a rubber spatula, set the mixer to low and add the eggs, followed by the sugar. Increase the mixer speed to medium and beat for about 3 minutes, until the dough forms a ball. Reduce speed to low and add the butter in 2 Tablespoon size chunks, beating until each piece is almost incorporated before adding the next. You¢â¬â„¢ll have a dough that is very soft, almost like a batter. Increase the speed to medium-high and continue to beat until the dough pulls away from the sides of the bowl, about 10 minutes (This made my heavy kitchen aid mixer “dance” across the counter, so you may want to listen and be available to steady the mixer).

Transfer the dough to a clean bowl, cover with plastic wrap and leave at room temperature until nearly doubled in size, 40-60 minutes. Deflate the dough by lifting it up around the edges and letting it fall with a slap into the bowl. Cover the bowl with plastic wrap and put it in the refrigerator. Slap the dough down in the bowl every 30 minutes until it stops rising, about 2 hours, then leave the covered dough in the refrigerator overnight.

If making Brioche loaves: Butter and flour 2 8.5 X 4.5 inch loaf pans. Pull dough from the fridge and divide into two equal pieces. Working with one piece of dough at a time, roll out dough as thin as you can while still keeping it in one piece. Spread half of the filling evenly on top the dough. Roll up tightly and place into prepared pan with ends tucked under. Repeat with second loaf.

Preheat oven to 400 degrees F. Bake until loaves are well risen and deeply golden, about 30-35 minutes. Cool for 15 minutes, then run a knife around the sides of the pans and turn the loaves out onto cooling racks. Cool at least one hour.

Source: Baking From My Home to Yours by Dorie Greenspan 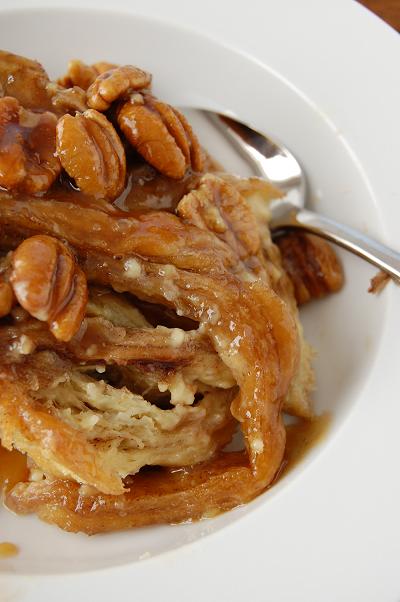 To Make the Glaze: In a heavy-bottomed saucepan, bring the brown sugar, butter and honey to a boil over medium-low heat, stirring frequently to dissolve the sugar. Pour the glaze into the buttered pan(9 -x-13), evening it out as best you can by tilting the pan or spreading the glaze with a heatproof spatula. Sprinkle over the pecans.

Whisk all the above ingredients together.

To make the bread pudding slice pieces of the cinnamon bread, removing the crust. Start stacking bread on top of Sticky Bun Glaze. Stop when you reach the top of the pan. It took me about 1 and ¼ loaves of bread. Pour half the custard mixture over the bread and press down to help the bread soak up the liquid. Keep adding liquid until the bread has soaked it in. You may have some custard left.
Place pan into another pan that will hold a water bath. Bake the bread pudding(in a 350F oven) for1 hour or until golden on top. Cool 10 minutes and serve warm. Spoon sauce from bottom of pan over the bread pudding. 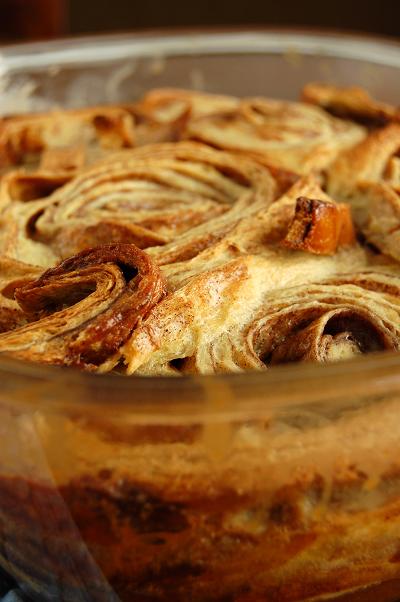