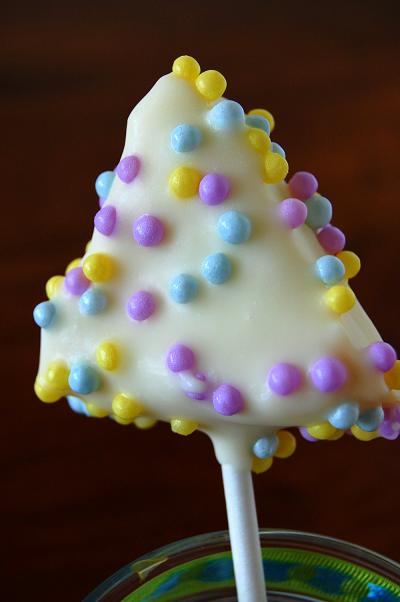 Well, this was a Daring Baker first for me. No, it’s not that I haven’t made this before, it’s that I have never waited until the day it was due to do the challenge! AHHHHH. I thought I had more time, guess not.

This month’s challenge comes from Elle of Feeding My Enthusiasms and Deborah of Taste and Tell. They selected Cheesecake Pops from one of my newer cookbooks, Sticky, Chewy, Messy, Gooey. These fell into the messy category as the dipping in the chocolate and the flying sprinkles everywhere got a little messy. Then again, I was in a bit of a hurry. 🙂

These fun little pops would be a great thing to make with your kids or to serve at one of their parties. They can be formed into many shapes. If I had a little more time to be creative, I would have gone that route. Even if you are not a kid, these are certainly tasty…I mean it’s cheesecake on a stick…covered in chocolate! 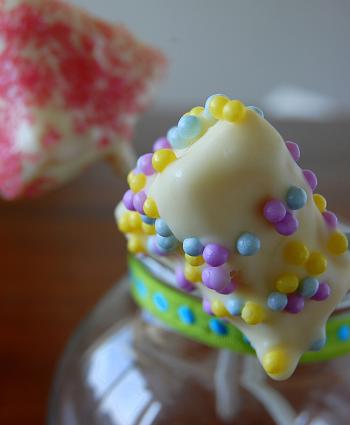 1 pound chocolate, finely chopped ¢â¬â€œ you can use all one kind or half and half of dark, milk, or white (Alternately, you can use 1 pound of flavored coatings, also known as summer coating, confectionary coating or wafer chocolate ¢â¬â€œ candy supply stores carry colors, as well as the three kinds of chocolate.)

Position oven rack in the middle of the oven and preheat to 325 degrees F. Set some water to boil.

In a large bowl, beat together the cream cheese, sugar, flour, and salt until smooth. If using a mixer, mix on low speed. Add the whole eggs and the egg yolks, one at a time, beating well (but still at low speed) after each addition. Beat in the vanilla and cream.

Grease a 10-inch cake pan (not a springform pan), and pour the batter into the cake pan. Place the pan in a larger roasting pan. Fill the roasting pan with the boiling water until it reaches halfway up the sides of the cake pan. Bake until the cheesecake is firm and slightly golden on top, 35 to 45 minutes.

Remove the cheesecake from the water bath and cool to room temperature. Cover the cheesecake with plastic wrap and refrigerate until very cold, at least 3 hours or up to overnight.

When the cheesecake is cold and very firm, scoop the cheesecake into 2-ounce balls and place on a parchment paper-lined baking sheet. Carefully insert a lollipop stick into each cheesecake ball. Freeze the cheesecake pops, uncovered, until very hard, at least 1 ¢â¬â€œ 2 hours.

Alternately, you can microwave the same amount of chocolate coating pieces on high at 30 second intervals, stirring until smooth.

Refrigerate the pops for up to 24 hours, until ready to serve. 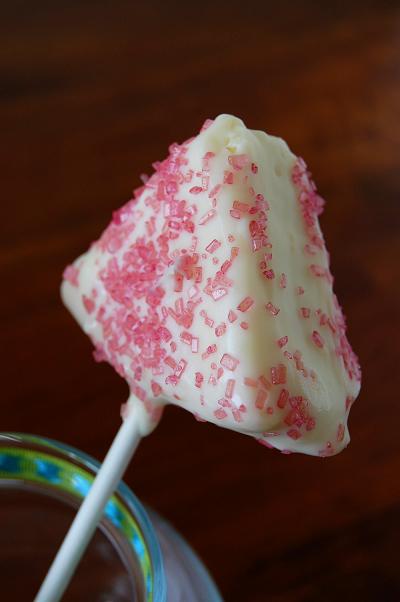