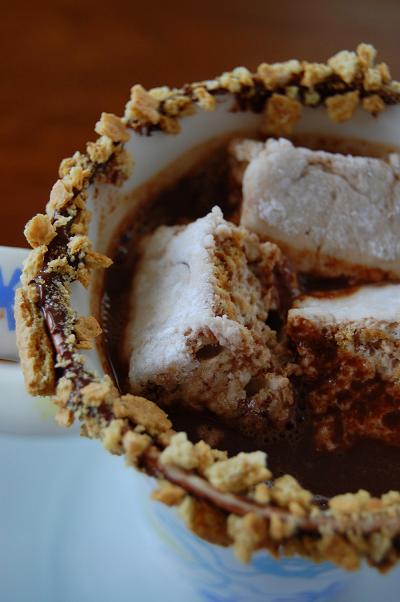 One of the greatest things I learned about my husband is that camping to him was in a 4 star hotel. Score.
Now don’t get me wrong, I like the outdoors, heck, I was Forestry major my freshman year of college. But sleeping on the rocky ground vs. a mattress is really a no brainer. Tying my food up so that a bear does not come into camp vs. brunch with a mimosa..again no brainer. Washing yourself in a river where an elk was peeing earlier vs. a hot shower. No brainer. And speaking of peeing, this is pretty much the main reason I do not camp. Call it the only time when I have penis envy. I was not made to go to the bathroom outside. And no, an outhouse the smells ungodly with a spider in the corner just waiting to pounce on me is not a suitable option.
Now, I know that many people camp and love it. I know many of those people have RV’s. I would rather just spend the money on the nice hotel and drive out to see the pretty scenery during the day.
I do miss one thing about camping though and that is S’mores. The treat that I learned to love in Girl Scouts. Lucky for me, my Girl Scout troops rarely camped. Believed to come from the Girl Scout handbook in 1927 as “Some Mores” the concoction asked for “16 graham crackers, 8 bars plain chocolate (any of the good plain brands broken in two), and 16 marshmallows”. By 1940 it had involved into “4 squares plain chocolate (thin), 2 graham crackers, and one marshmallow. This recipe may be varied by using slices of apple (cut cross-wise) in place of the graham crackers; by using pineapple slices or peanut butter in place of chocolate.”
I am personally a purist. I just want the gooey marshmallow, chocolate and graham cracker…and for some reason, the cheaper the better.
So when Judy of Judy’s Gross Eats chose marshmallows as this weeks Tuesday’s with Dorie treat, I figured I would just cut out the middle man and put the S’more into the marshmallow. I have made marshmallows quite a few times. I love to make them at Christmas time to go into hot chocolate.
I have been fortunate enough that the weather has been chilly and so I made hot chocolate to enjoy with my marshmallows. If you  have never had homemade kind they really are worth it….especially in hot chocolate.
My husband and I are going camping this weekend in Portland. Granted we are camping from a four star hotel…but I’m sure will be roughing it! 😛 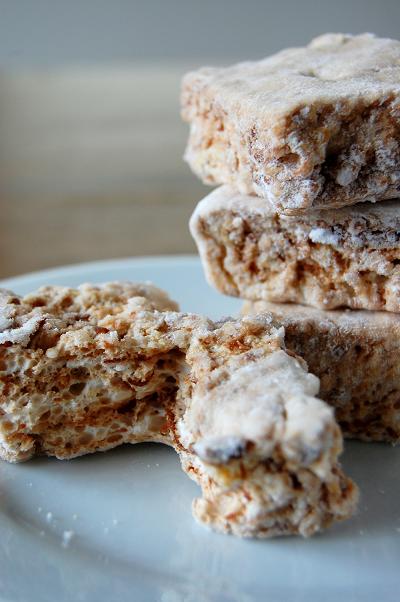 GETTING READY: Line a rimmed baking sheet — choose one with a rim that is 1 inch high — with parchment paper and dust the paper generously with potato starch or cornstarch. Have a candy thermometer at hand.

Put 1/3 cup of the water, 1 1/4 cups of the sugar and the corn syrup in a medium saucepan over medium heat. Bring the mixture to a boil, stirring until the sugar dissolves. Once the sugar is dissolved, continue to cook the syrup — without stirring — until it reaches 265 degrees F on the candy thermometer, about 10 minutes.

While the syrup is cooking, work on the gelatin and egg whites. In a microwave-safe bowl, sprinkle the gelatin over the remaining cold water (a scant 7 tablespoons) and let it sit for about 5 minutes, until it is spongy, then heat the gelatin in a microwave oven for 20 to 30 seconds to liquefy it. (Alternatively, you can dissolve the gelatin in a saucepan over low heat.)

Working in the clean, dry bowl of a stand mixer fitted with the whisk attachment or in another large bowl with a hand mixer, beat the egg whites on medium-high speed until firm but still glossy — don’t overbeat them and have them go dull.

As soon as the syrup reaches 265 degrees F, remove the pan from the heat and, with the mixer on medium speed, add the syrup, pouring it between the spinning beater(s) and the sides of the bowl. Add the gelatin and continue to beat for another 3 minutes, so that the syrup and the gelatin are fully incorporated. Beat in the vanilla.

Using a large rubber spatula, scrape the meringue mixture onto the baking sheet, laying it down close to a short end of the sheet. Then spread it into the corners and continue to spread it out, taking care to keep the height of the batter at 1 inch; you won’t fill the pan. Lift the excess parchment paper up to meet the edge of the batter, then rest something against the paper so that it stays in place (I use custard cups).

Once they are cool and set, cut the marshmallows with a pair of scissors or a long thin knife. Whatever you use, you’ll have to rinse and dry it frequently. Have a big bowl with the remaining potato starch or cornstarch at hand and cut the marshmallows as you’d like — into squares, rectangles or even strips (as they’re cut in France). As each piece is cut, drop it into the bowl. When you’ve got 4 or 5 marshmallows in the bowl, reach in with your fingers and turn the marshmallows to coat them with starch, then, one by one, toss the marshmallows from one hand to the other to shake off the excess starch; transfer them to a serving bowl. Cut and coat the rest of the batch.

STORING: Keep the marshmallows in a cool, dry place; don’t cover them closely. Stored in this way, they will keep for about 1 week — they might develop a little crust on the outside or they might get a little firmer on the inside, but they’ll still be very good. 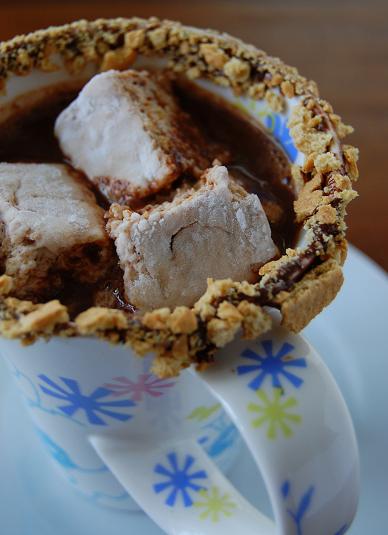 After you add in the vanilla, fold in 1/3 cup crushed graham cracker crumbs. Carefully fold in 3 ounces of melted milk chocolate. Becareful not to incorporate the chocolate into the marshamallow, you are going for more of a ribbon effect. 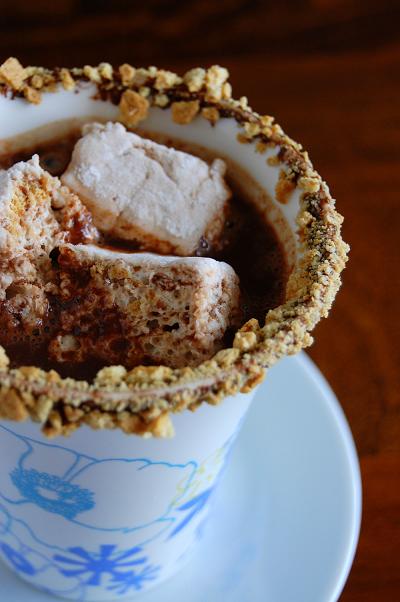