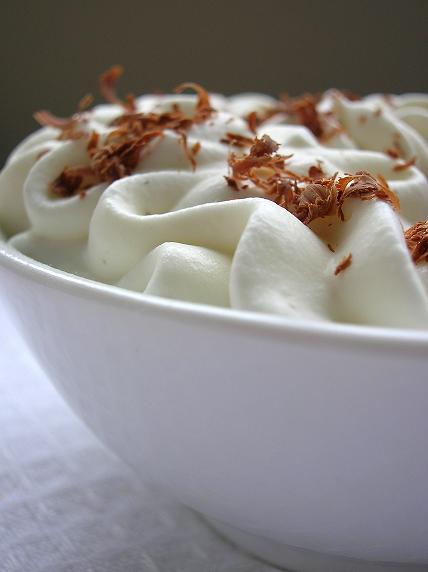 The torch was passed off to Helen of Tartelette(not Troy)…and the parade of cheesecake was gone and is soon to become the parade of mousse. That’s right, this installment of Hay, Hay it’s Donna Day is mousse…any type you would like. Since Donna is simple flavored woman that is what I tried to stick with. If you are not familiar with the whole HHDD extravaganza head on over to Barb’s (the founder of HHDD) website, winos and foodies.
I was a little torn on this one. Part of me wanted to do a more traditional mousse and the other part of me wanted to get creative. So I just did both…because two types of mousse is always better than one! I was not at all creative with the chocolate mousse, the only deviation from the recipe was to add Kahlua. This makes for a nice thick mousse that sets up nicely. I used the bittersweet chocolate instead of the semisweet. Now my other mousse is a different story. Inspired by my over zealous cheese purchase, where I left the cheese store with 9 different types of cheese. There sat two tubs of Mascarpone cheese…surely I could make something with that. I love honey with Mascarpone and I thought the speckles of vanilla dotting the creamy white mousse would be a nice touch…it was. This one is much softer than the chocolate mousse and the next time I make it I might experiment with adding a little gelatin.
And for all you waiting for the daily hockey report…I am happy to say that there was little swearing in our household today. The Sabres did indeed win and my favorite player had the game winning goal. Tomorrow, however…may be a different story…it is the Flames turn to do something less pathetic than what they have been doing! Update: I am happy to say that the Flames actually won tonight….a cuss free home tonight! 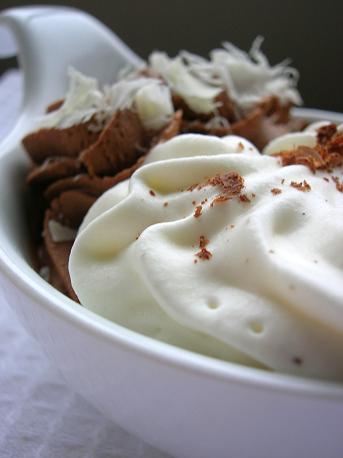 Put the chocolate in a medium heatproof bowl. Bring a saucepan filled with 1 inch or so of water to a very slow simmer; set the bowl over, but not touching, the water. Stir the chocolate occasionally until melted and smooth. (Alternatively, put the chocolate in a medium microwave-safe bowl. Melt at 50 percent power in the microwave until soft, about 1 minute. Stir, and continue heat until completely melted, about 1 to 2 minutes more.)
Whip the cream in a medium bowl until it holds soft peaks. Take care not to over whip the cream or the mousse will be dense. Cover and refrigerate while you cook the eggs.

Put the eggs in another bowl that also sets over the water in the saucepan. Beat the egg yolks, pinch of salt, and sugar until foamy and light, about 30 seconds. Set the bowl over the water and whip with an electric mixer or whisk, moving in a circular motion around the bowl, until the eggs get very fluffy and hot to the touch, about 3 minutes. Remove the bowl from the heat and continue beating on high speed until the thick ribbons fall from the beater when lifted out of the bowl, about 5 minutes more. Fold in the Kahlua.

Fold about a quarter of the eggs into the chocolate to lighten it, then fold in the rest of the egg. Finally fold the whipped cream into the chocolate base to make a smooth light mousse. Pour the mousse into 4 serving dishes or wine glasses. Cover and refrigerate until set, about 1 hour. Serve.

For a dark, double-rich mousse, use all bittersweet chocolate instead of the semisweet, and decrease the cream to 3/4 cup.

Source: Adapted from the Food Network.com 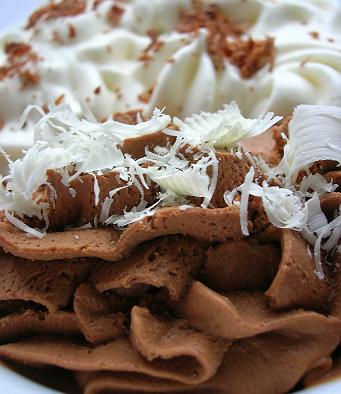 Cut vanilla bean in the half. Reserve the other half for later. Scape seeds from one half of the bean into half and half. Heat half and half in a sauce pan just until it starts to bubble and take off of heat. Let cool.
Blend together the Mascarpone cheese and the honey. Pour the milk in the Mascarpone mixture and combine.
Scrape the other half of the vanilla bean and put in cream, whisk to incorporate. Whip heavy cream and refrigerate.
Whip the egg white and the sugar forming a glossy but not too stiff merginue.
Pour the mixture of Mascarpone in the whipped egg white, using a spatula,
combine gently.
Fold in the whip cream and combine gently.
Refrigerate for one hour. 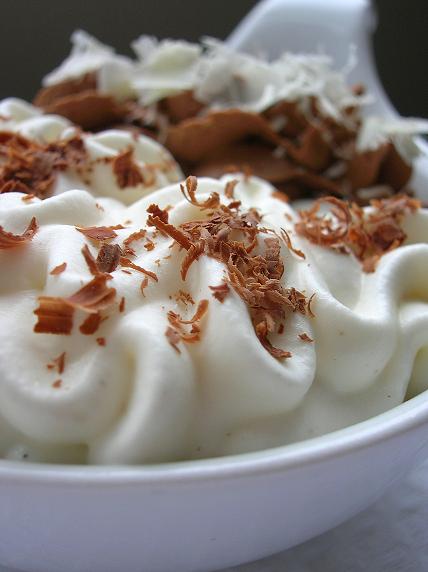 « What’s the Story, Morning Glory?
Pie with a side of strength… »