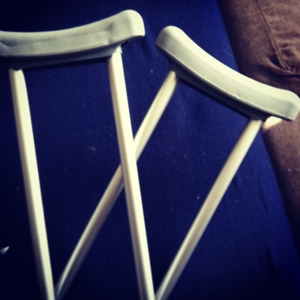 So just four days before I was to leave for the IFBC (International Food Bloggers Conference) I got an email from my hockey league saying that they had moved my game up. Normally I wouldn’t care all that much except that this meant that I wouldn’t get to play in my championship game…and I’m the captain darn it all. So I got my train ticket changed to an early time and decided to leave the conference a little early.

Got off the train and went to hockey game. Three shifts in I stood there watching a guy wind up as they call it. I do this all the time it is not unusual. Though I did realize who I was standing in front of (one of the better players) and just kept thinking please let it hit the calve, let it hit the calve, let it hit the calve (more padding) but no…it hit the ankle. Immediately it was completely numb. I tried to limp to the bench on one foot but my whole team yelled at me to drop so I did. Then the guys dragged me to the bench. Lucky for me we have an EMT on my team. He came over and took off my gear and skate and assessed me and told me to get my butt to the ER. Luckily MDP mom and sister (and nephew) were all there watching the game and so my future SIL was nice enough to take me to the ER and I made MDP finish out the game (he’s our best player…have to think about the team and all 😀 ).

After all was said and done it is just a contusion on the ankle bone. Which is good for the fact that usually heals better than a sprain or break. Though they want me back to the doctor a couple days after I start putting pressure on it as that is often when the fracture shows up. So fingers crossed. So for now crutches are my mode of transportation. I of course had to injure my driving foot so to speak and so driving is out. 🙁

Perhaps other than all the obvious stuff about what happened is that unlike BlogHer Food I came back home from IFBC inspired and ready to bake and blog like a mad woman. Opps. It was such a fun conference and so much more intimate, you really got to talk to people and get to know them. I really enjoyed the fact that I got to go to late dinner with not only my blogger friends Kevin and Joelen but with a cookbook editor. Except none of us were there to pitch her book ideas (I know…you want me to write a book) we were there just to get to know her as a person and what a great person she was! It was a fun night. It was a fun conference and I am excited that next year it’s back in Seattle!!!

So we will see how baking with crutches goes. 🙂 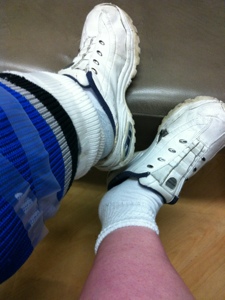