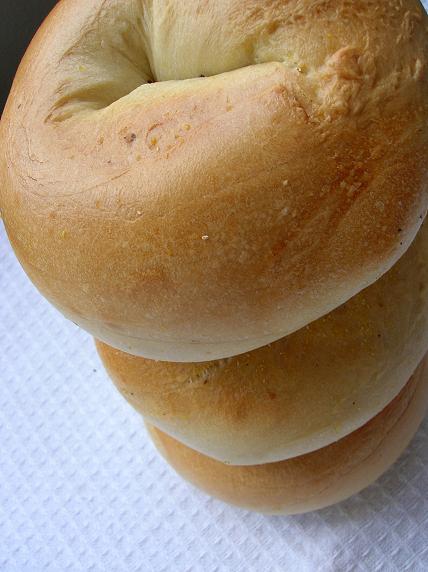 Bagelmania is here courtesy of the Daring Bakers(Freya and Jenny to be exact). This month’s challenge was to make, as the recipe says, Real Honest Purist’s Bagels. Now it has been a few years since I made bagels, and it had been a really long time since I made plain bagels. I like most people buy their bagels. But it is fun to do and if you have never made them before it is definitely something you should add to your list of things to learn to do.
One thing many of the daring bakers learned during this task was that though you think you don’t need anymore flour, you are to use all of the flour! For me, my quirks were that I only had one sink(a rebel no doubt) while the rest just floated. They should sink and then float…gracefully according to the recipe. Well there was nothing graceful about how my one bagel floated to the top. My other problem was that I did this rushed and so I did not really pay attention to the fact that during half proofing they pretty much whole proofed and there were no more holes in my bagels….just a bagel butt crack. I did have one hole(see photo of poppyseed bagel below). But the rest, nothing but bagel butt crack I tell ya! I did deviate on one part. I did egg wash my plain bagels. I just could not stand them not being brown, though they were no where near as brown as you would like them. I of course only took pictures of the halfway decent looking ones too. 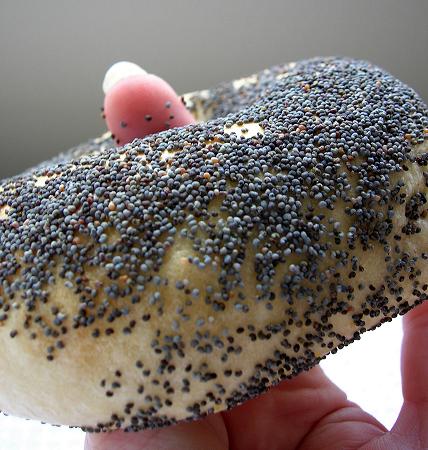 First, pour three cups of hot water into the mixing bowl. The water should be hot, but not so hot that you can’t bear to put your fingers in it for several seconds at a time. Add the sugar or honey and stir it with your fingers (a good way to make sure the water is not too hot) or with a wire whisk to dissolve. Sprinkle the yeast over the surface of the water, and stir to dissolve.

Wait about ten minutes for the yeast to begin to revive and grow. This is known as “proofing” the yeast, which simply means that you’re checking to make sure your yeast is viable. Skipping this step could result in your trying to make bagels with dead yeast, which results in bagels so hard and potentially dangerous that they are banned under the terms of the Geneva Convention. You will know that the yeast is okay if it begins to foam and exude a sweetish, slightly beery smell.

At this point, add about three cups of flour as well as the 2 tsp of salt to the water and yeast and begin mixing it in. Some people subscribe to the theory that it is easier to tell what’s going on with the dough if you use your hands rather than a spoon to mix things into the dough, but others prefer the less physically direct spoon. As an advocate of the bare-knuckles school of baking, I proffer the following advice: clip your fingernails, take off your rings and wristwatch, and wash your hands thoroughly to the elbows, like a surgeon. Then you may dive into the dough with impunity. I generally use my right hand to mix, so that my left is free to add flour and other ingredients and to hold the bowl steady. Left-handed people might find that the reverse works better for them. Having one hand clean and free to perform various tasks works best.

When you have incorporated the first three cups of lour, the dough should begin to become thick-ish. Add more flour, a half-cup or so at a time, and mix each addition thoroughly before adding more flour. As the dough gets thicker, add less and less flour at a time. Soon you will begin to knead it by hand (if you’re using your hands to mix the dough in the first place, this segue is hardly noticeable). If you have a big enough and shallow enough bowl, use it as the kneading bowl, otherwise use that clean, dry, flat countertop or tabletop mentioned in the “Equipment” list above. Sprinkle your work surface or bowl with a handful of flour, put your dough on top, and start kneading. Add bits of flour if necessary to keep the dough from sticking (to your hands, to the bowl or countertop, etc….). Soon you should have a nice stiff dough. It will be quite elastic, but heavy and stiffer than a normal bread dough. Do not make it too dry, however… it should still give easily and stretch easily without tearing.

Place the dough in a lightly oiled bowl, and cover with one of your clean kitchen towels, dampened somewhat by getting it wet and then wringing it out thoroughly. If you swish the dough around in the bowl, you can get the whole ball of dough covered with a very thin film of oil, which will keep it from drying out.

Place the bowl with the dough in it in a dry, warm (but not hot) place, free from drafts. Allow it to rise until doubled in volume. Some people try to accelerate rising by putting the dough in the oven, where the pilot lights keep the temperature slightly elevated. If it’s cold in your kitchen, you can try this, but remember to leave the oven door open or it may become too hot and begin to kill the yeast and cook the dough. An ambient temperature of about 80 degrees Farenheit (25 centigrades) is ideal for rising dough.

While the dough is rising, fill your stockpot with about a gallon of water and set it on the fire to boil. When it reaches a boil, add the malt syrup or sugar and reduce the heat so that the water just barely simmers; the surface of the water should hardly move.

Once the dough has risen, turn it onto your work surface, punch it down, and divide immediately into as many hunks as you want to make bagels. For this recipe, you will probably end up with about 15 bagels, so you will divide the dough into 15 roughly even-sized hunks. Begin forming the bagels. There are two schools of thought on this. One method of bagel formation involves shaping the dough into a rough sphere, then poking a hole through the middle with a finger and then pulling at the dough around the hole to make the bagel. This is the hole-centric method. The dough-centric method involves making a long cylindrical “snake” of dough and wrapping it around your hand into a loop and mashing the ends together. Whatever you like to do is fine. DO NOT, however, give in to the temptation of using a doughnut or cookie cutter to shape your bagels. This will pusht them out of the realm of Jewish Bagel Authenticity and give them a distinctly Protestant air. The bagels will not be perfectly shaped. They will not be symmetrical. This is normal. This is okay. Enjoy the diversity. Just like snowflakes, no two genuine bagels are exactly alike.

Begin to preheat the oven to 400 degrees Farenheit.

Once the bagels are formed, let them sit for about 10 minutes. They will begin to rise slightly. Ideally, they will rise by about one-fourth volume… a technique called “half-proofing” the dough. At the end of the half-proofing, drop the bagels into the simmering water one by one. You don’t want to crowd them, and so there should only be two or three bagels simmering at any given time. The bagels should sink first, then gracefully float to the top of the simmering water. If they float, it’s not a big deal, but it does mean that you’ll have a somewhat more bready (and less bagely) texture. Let the bagel simmer for about three minutes, then turn them over with a skimmer or a slotted spoon. Simmer another three minutes, and then lift the bagels out of the water and set them on a clean kitchen towel that has been spread on the countertop for this purpose. The bagels should be pretty and shiny, thanks to the malt syrup or sugar in the boiling water.

Once all the bagels have been boiled, prepare your baking sheets by sprinkling them with cornmeal. Then arrange the bagels on the prepared baking sheets and put them in the oven. Let them bake for about 25 mintues, then remove from the oven, turn them over and put them back in the oven to finish baking for about ten minutes more. This will help to prevent flat-bottomed bagels.

Remove from the oven and cool on wire racks, or on a dry clean towels if you have no racks. Do not attempt to cut them until they are cool… hot bagels slice abominably and you’ll end up with a wadded mass of bagel pulp. Don’t do it.

TO CUSTOMIZE BAGELS: After boiling but before baking, brush the bagels with a wash made of 1 egg white and 3 tablespoons ice water beaten together. Sprinkle with the topping of your choice: poppy, sesame, or caraway seeds, toasted onion or raw garlic bits, salt or whatever you like. Just remember that bagels are essentially a savory baked good, not a sweet one, and so things like fruit and sweet spices are really rather out of place. 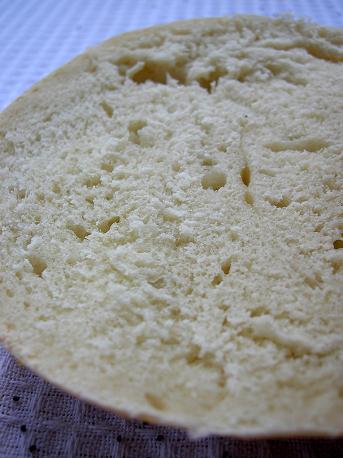 To see more Bagelmania, check out what the other Daring Bakers did with theirs(see blogroll that says…what else, Daring Bakers). 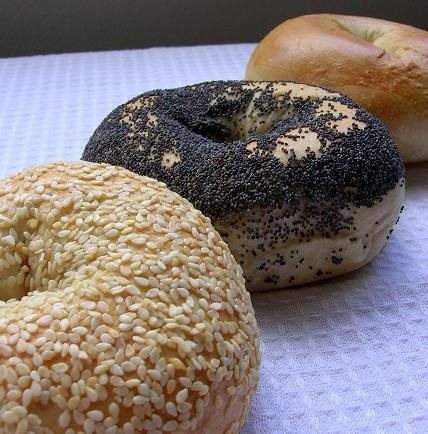 « Basque in its glory….
Im”PIE”rfection »