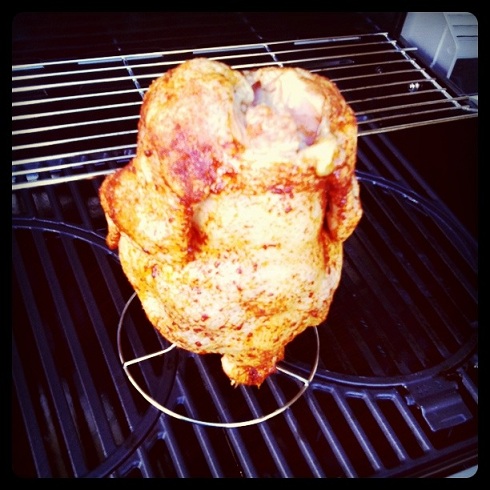 Just when I was ready to scrounge for dinner in walks in my bff (sous chef) with a whole raw chicken, see the day before while buying a grill cover I saw on sale a beer can chicken holder and had to buy it. Not really knowing how one actually cooks it off I went to the exciting world of the Internet. I found directions as well as some ideas to enhance the flavor.

The best part of beer can chicken is that you only need half a beer…so you get to pre chicken cocktail so to speak, because you don’t want to waste good beer (well it wasn’t that good of beer, but you know what I mean).We accidently drank too much of the first can and had to crack open a new one. This might have accidently happened a few times.

I made the sous chef remove the innards and I patted it dry like I was TSA thinking it had a bomb. Then I rubbed the chicken down with olive oil massaging it and joking with the chicken (yes, I am weird) that not to worry that it would be getting a happy ending 😉 in the form of a beer can going up its butt. 🙂 Then I rubbed my spice mixture, popped it onto the rack and went out to put it on the preheated grill. Getting it on the hot grill was interesting and I ended up coating myself in spice rub but it made it on there. I proudly took a picture and quickly posted it on my personal FB page. People chimed in saying see you are a natural.

HAHAHAHAHA. Let’s look at what a natural I am (see below). Yes, that’s my chicken engulfed in flames. See you cook a beer can chicken on what they call indirect heat, which means for me that I start all 4 burners and then turn the middle two off so that it’s not getting direct heat. And we did that. But then the temperature went too low so we turned the burners that we turned off on to low. Still not hot enough. Turned it up a little (we are very impatient…which is what happens when you decide to grill at 8pm). Then we went in the kitchen and got talking and forgot about the chicken. This is what the directions said to do, it said to leave it alone in its thoughts. When we went to check on the temperature it’s smelled a little burnt. So we lifted up the top to see my mighty chicken a flame. Cremated really. We killed the flames with squirt bottle and the sous chef and I decided that screw it, just keep cooking it and we will just eat it skinless…it’s better for you that way anyway. 😛 We then proceeded to laugh hysterical.

So we let it cook for a little longer and I popped in the thermometer and it was done. There it stood, my majestic “Cajun style” beer can chicken. I use the term Cajun style as my dad called everything he ever burnt Cajun style to us kids….we ate a lot of Cajun style. Imagine my surprise when I grew up and had real Cajun food. 😀

I let it cool off and once we peeled off the special Cajun layer I could tell that hey this was actually looking pretty good. Juicy in fact. So we picked off most of the blackened layer and picked away at the chicken. Holy crap was that some good chicken. Like probably the best chicken I have had in a long while. The sous chef and I were quite proud. We ate it just how it was since I was not planning on him just showing up with a raw whole chicken. I chopped up the leftovers and made a chicken salad with it for my lunch tomorrow.

So as it stands in this match I can’t fully say that it was Peabody 0, Grill 1 as I actually got a really awesome chicken out of the deal. BUT not how I was supposed to. 😛 So I am going with Peabody 1/4 , Grill 3/4. Live and learn and burn…. 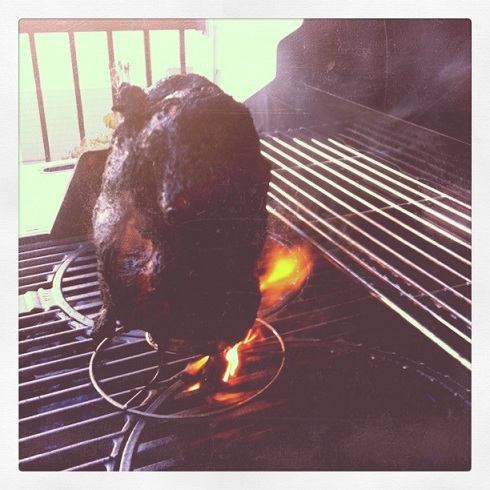 In a bowl combine the salt, sugar, paprika, turmeric, and pepper. Stir until fully integrated. Set aside.

Remove neck and giblets from chicken (get someone else to do this…that’s what the sous chef is for) and throw away but not where the dog sees you or else she will have her nose in it.

Rinse chicken inside and out, and pat dry with paper towels.

Massage chicken with oil then rub inside and out with salt, pepper and dry rub. Set aside.

Open the beer can and drink until half way full…if you don’t want people germs, be polite and pour it in a glass. Or just do what I do and tell people I poured it into a glass.

Place beer can into the center of the holder. Plop the chicken butt side down over the beer can, push down to make sure it’s good an up there.

Transfer the chicken to your grill and place in the center of the grate.

Cook the chicken over medium-high, indirect heat (i.e. no coals or burners on directly under the chicken), with the grill cover on, for approximately 1 1/4 hours or until the internal temperature registers 165 degrees F in the breast area and 180 degrees F in the thigh, or until the thigh juice runs clear when stabbed with a sharp knife. Remove from grill and let rest for 10 minutes before carving. That’s what you are supposed to do. I of course set it on fire and checked several times to make sure I was no longer setting it on fire. Then, if you did it my way, you will need to let the chicken cool a little before you peel off the blackened outside. 😛 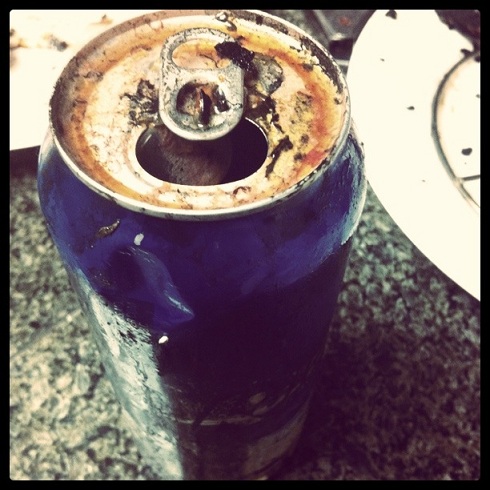