My poor husband rarely gets to see the site of red meat. So when he does he usually throws a parade. I am not super gung ho about red meat so I like to make several sides when I do make him a steak. I had made a nice garlicky potato salad with thick pieces of bacon in it but knew I wanted something more. We were just talking the other day how I never use the Fry Daddy that I got 6 years ago and maybe I should start exploring the world of frying. Since my husband is from the south he is used to everything being fried. I am not in favor usually of frying things but for some reason the idea of having homemade onion rings on top of the steak sounded good.
The turned out great but I did change the recipe slightly. I added 1/2 packet of dry ranch dressing to the dry ingredients for dredging. I thought it would go nice with the potato salad we were having.

Drain on paper towels. Let oil come back to temperature before frying next batch 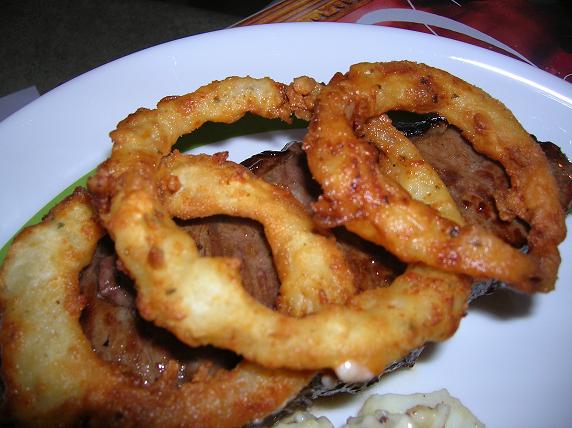 « When all else fails
Going Bananas »